File contains a letter from E.E Johnston to Leo McKay regarding information requested by McKay about Johnston's grandfather, William H. Johnston. Enclosed is a 1937 article from The Machinist's Journal regarding the life and death of William Johnston.

File contains a letter to Janet Barkhouse from her mother, Joyce Barkhouse, which mentions, among other things, her story "Connie Catches a Fish." The file also contains a story about Joyce's childhood, typed by Janet; a newspaper clipping about Joyce's brother Fred Killam's retirement from the family orchard at Woodville; a copy of an obituary for Gardy Killam (Fred's wife, d. 2008); and a copy of a poem written for Dr. H.E. Killam for his 53rd birthday.

Documents related to the death of Charles Edward Ells

File contains documents related to the death of Charles Edward Ells, Joyce Barkhouse's cousin. Materials include a selective pictorial biography with family pictures, correspondence with his immediate family, an obituary, articles, and a photograph of Ellis in his youth.

Fonds contains Dr. Herbert MacRae’s obituary and tribute articles dedicated to the former Nova Scotia Agricultural College principal. Additionally, the fonds contains a plaque naming the NSAC library in his honour in 1990, and correspondence between Herbert F. MacRae and Layman T. Chapman from 1974. 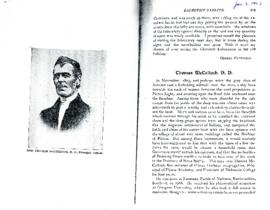 Obituary and correspondence regarding the death of Marian Lacey

Fonds is comprised of Richard (Dick) Morton’s Nova Scotia Agricultural College certificates; photographs (including the NSAC 1952 graduating class photo); a copy of The 50th anniversary of 4-H in Nova Scotia; newspaper clippings; a certificate of recognition and appreciation on Richard Morton’s retirement; Mr. Morton’s obituary; notes of condolence; two personal accounts from friends/colleagues, including Memories of Dick Morton, by Robert Murray, Class of 1952; and an untitled and anonymous poem dated 1978.