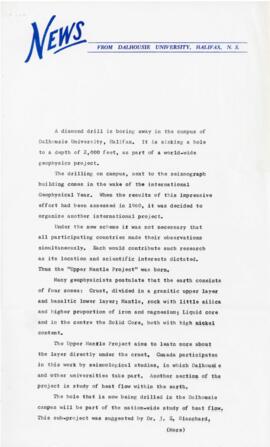 Dalhousie University. Office of the President

Although the first president of Dalhousie College, Thomas McCulloch, was appointed in 1838, it wasn’t until 1945 that the Board of Governors determined the specific responsibilities of the Office of the President, wherein the president became responsible for the general supervision of the university, encompassing all areas from the academic program to the student body.

Dr. Richard Florizone became the 11th president of Dalhousie in 2013. Other presidents were:

Rev. John Forrest; 1885 to 1911. Known as “Lord John,” he was the first George Munro professor of history and political economy, joining Dalhousie in 1880.

Dr. Carleton Wellesley Stanley, 1931 to 1945. A University of Toronto and Oxford graduate, he taught English at Toronto and Greek at McGill. He was also a Canadian correspondent of the Manchester Guardian (1913 to 1916);

Dr. Alexander Enoch Kerr served as President from 1945 to 1963. He was the second Dalhousie graduate to become president. Born in Louisbourg, he was the third Presbyterian minister, and principal of Pine Hill Divinity Hall (1939 to 1945).

Dr. Henry Davies Hicks was Dalhousie’s leader from 1963 to 1980. A Rhodes Scholar, lawyer, politician, Premier and first Minister of Education of Nova Scotia in the 1950s, he is the only Dalhousie president (to date) to become a Senator of Canada.

Dr. Howard C. Clark, 1986-1995. Born in New Zealand; taught chemistry and held administrative posts at the Universities of Western Ontario, British Columbia, Auckland and Guelph. While at Guelph he held a position as vice-president.

Dr. Tom Traves, 1995-2013. As president, Dr. Traves oversaw mergers with the Technical University of Nova Scotia and the Nova Scotia Agricultural College, and spearheaded the $280 million Bold Ambitions Fundraising campaign. Dr. Traves also presided over a significant reshaping of campus, including the addition of new buildings and student spaces.

Materials have been donated by the President’s Office on an ongoing basis since 1972.

All files are closed for 50 years after the date of creation.