Address at the ceremony marking the completion of eleven houses at Sheet Harbour, Nova Scotia

File contains a copy of Hicks' address, correspondence and and an agenda for the official opening ceremony that took place February 10, 1979.

Address at the official opening of the Kendall Heights Apartment

File contains the text of Henry Hicks' address and related correspondence, research material, correspondence and an agenda for the opening ceremony held on May 12, 1979.

File contains correspondence from the Canadian Labour Congress, National Commission on Human Rights, regarding housing and employment matters, to two residents of Africville who were later human subjects who participated in a study on the forced migration of residents of Africville. The study was conducted by Don Clairmont and Dennis Magill in the late 1960s. File also contains agenda from Halifax city council meeting and draft of a report.

Collection contains the minutes and reports of the Student Council and its related committee and administrative correspondence.

File contains a draft report prepared by the Development Department of the City of Halifax, Nova Scotia, outlining the type, age and condition of housing stock, the relative cost of housing, residential densities, special housing and special problems related to housing in Halifax, Nova Scotia in the mid-1960s.

This series contains papers relating to the construction of Ward's house on Beaufort Avenue in Halifax, Nova Scotia.

Notes for remarks at the opening of the Senior Citizens Housing Project in Mahone Bay, Nova Scotia 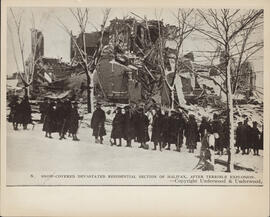 Photograph of damage from the Halifax Explosion in a residential area

Program, correspondence and notes for remarks at the official opening of the Senior Citizens Housing Units, Bridgewater, Nova Scotia

Program, correspondence and notes for remarks at the official opening of the Senior Citizens Housing Units, Caledonia, Nova Scotia

Program, correspondence and notes for remarks at the official opening of the Senior Citizens Housing Units, Captain William Spry Lodge

Program, correspondence and notes for remarks at the official opening of the Senior Citizens Housing Units, Mount Uniacke, Nova Scotia

File contains correspondence and reports of the Housing Policy Review Committee, as well as reports to members of the Sub-Committee of Council on Africville and the Representatives of the Human Rights Advisory Committee about the progress of the Africville Relocation Program.