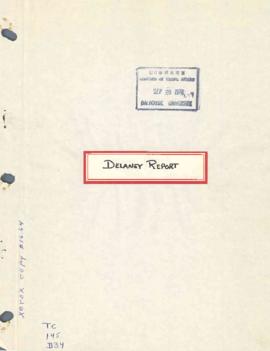 The Institute of Public Affairs (IPA) was founded in 1936 by Lothar Richter and Dalhousie University through a grant from the Rockefeller Foundation in recognition of the need for greater regional economic and social development. It began as an experimental organization, intended to make connections between Dalhousie University and the community and the social sciences and public policy. The IPA’s primary areas of activity were government, business, labour and community, with a focus on public administration.

Guy Henson was appointed director in 1957 with a mandate to reorganize the IPA. Under his guidance, the institute broadened its socio-economic research programs, including the Africville Relocation Project and significant work in labour-management relations.

The Institute of Public Affairs maintained its own library, with holdings of more than 18,000 items, which covered topics such as economic development, local government, industrial relations, management development and labour organization. Beginning in 1984 the institute's library was gradually integrated into Dalhousie University Libraries.

Fonds consists of textual records created and accumulated by various groups and organizations within the Institute of Public Affairs.. Records include articles, correspondence, minutes, memos, newspaper and magazine clippings, interviews, field notes, pamphlets and reports. Many of the documents pertain to the internal operations of the IPA.

The fonds also contains reference material kept by the IPA in its corporate library, which was used in the research and drafting of various reports.

The arrangement structure was determined by the processing archivists; the series are subject-based to facilitate access for researchers.

Some administrative files and research files containing personal information are closed until June 30, 2040.