A letter to the Canadian Government Travel bureau

File contains a paper called "A travller's [sic] view of Cuba's eastern provinces" by Barbara Hinds, for Dennis Wood. There is a note on the paper that says "with 5 photos" but the photographs are not included.

Series contains published works by Alexander E. Kerr, primarily on religious subjects. There is also a large volume of Christian literature as well as pamphlets from his travels in Canada. Other records include Dalhousie University pamphlets and programmes.

Bermuda tourism pamphlets and other documents 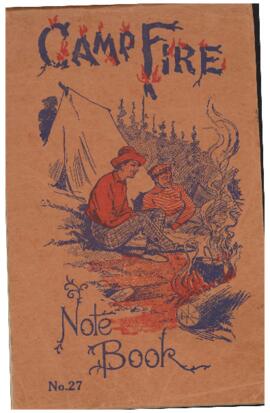 Item is one volume of a diary of Thomas H. Raddall, dating from June 29, 1972 - July 4, 1972 with accounts of a fishing trip to Moncton with a group of others. Entries include a bear sighting, salmon size, and the camp.

Fonds contains 23 volumes of Edith Dobson's personal diaries, written between 1948-1989, as well as two volumes of her travel diaries and a photograph of her at the time of her engagement in 1920.

Educational tour information and other documents

File contains one copy of the 1992-1993 Gayellow Pages: The National Edition, which provides a directory to LGBT services in Canada and the United States.

Series consists of records created and collected by Henry Hicks that document his interests and activities outside of his professional political and university careers, including committee work, social engagements, community involvement and travel. There are also financial records and correspondence relating to his father's business and estate and two notebooks belonging to his wife Gene. Record types include calendars, meeting minutes, invitations, programs, cassette tapes and newspaper clippings.

Highlights of suggestions in speech of Henry D. Hicks, QC, MLA, to the Halifax Progressive Club

Item is an annotated copy of the press release. 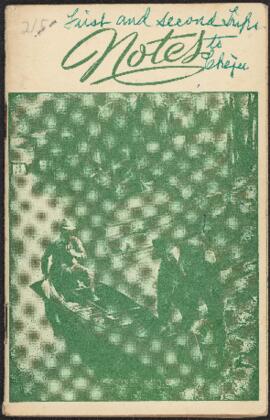 Item consists of two handwritten journals entries (one on loose paper, laid in at the front of the other) by Florence Murray, documenting her first two trips to the island of Cheju (Jeju), South Korea. The first, likely in 1958, was undertaken with Ed Baker, while the second took place in autumn 1960. 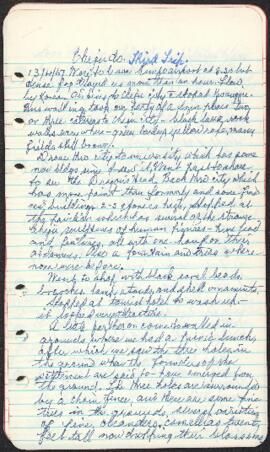 Notebooks written during travels in Africa

File contains four notebooks containing handwritten entries regarding research trips made throughout Africa between 1995 and 1998.

Notes for presentation to Atlantic Airways

Item is a handwritten manuscript written by Nora Leslie (then Nora Steenerson Totten) about an automobile trip taken with her husband, the Judge Totten and "Olga," from southern California to Paricutín volcano, Michoacán, Mexico.

Personal correspondence and other material

File contains correspondence with Alan; Pauline; Dominion Line; C. McRobert from EMI Installation & Maintenance Division; Craig J. M. Carter from the Journal of Commerce and Shipping and Telegraph Limited; J. Gumpert; B. G. Sivertz from the Department of Northern Affairs and National Resources; Max; R. E. Bennett from the Canadian Broadcasting Corporation; and Alvin Hamilton from the House of Commons. The file also includes a way bill from Wheeler Airlines; an invoice from Dominion Line for a trip from Hantsport, Nova Scotia to the United Kingdom; invoices from EMI-Cossor Electronics Limited for a tape recorder; a statement of account for contributions and expenses from the Liverpool Daily Post & Echo Ltd.; a newspaper clipping from the Mail-Star of "Joraens Canvas Displayed After Shock Test" by Barbara Hinds; a photocopy of a painting by Reubens; a photograph of a polar bear taken by Rosemary, with notes by Hinds; and a drawing by Martha Koneak. 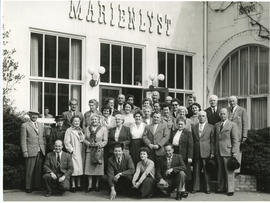 Photograph of a touring group, including Edith and Thomas Head Raddall, at the Marienlyst Hotel Elsinore, near Copenhagen, Denmark 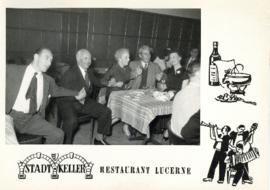 Photograph of Angelo the courier, Thomas Head and Edith Raddall, and Bleach at the Staat Keller restaurant in Lucerne, Switzerland printed on a postcard

Item, a photograph, is related to MS-2-202, Box 54, Folder 11, Item 5 and MS-2-202, Box 55, Folder 22, Item 12 in subseries Thomas Head Raddall's loose photographs. A note on the reverse side indicates that the restaurant featured a 'sing-song'. The gentleman on the right is identified as Bleach, from South Africa. 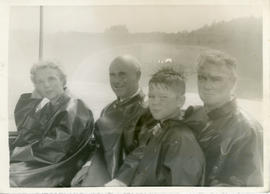 Photograph of Edith and Thomas Head Raddall with Johnnie and Hugh Kane aboard the tour boat Maid of the Mist at Niagara Falls, Ontario

Item, a photograph, is contained in a folder produced by the Maid of the Mist tourism boat. The folder provides the local lore of the region, points of interest within the Parks of Niagara, and details of the tour company's operations. 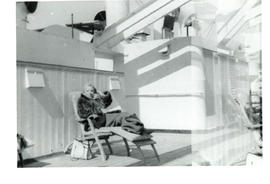 Photograph of Edith Raddall on the deck of the S/S Nova Scotia en route to Liverpool, England, wearing a fur coat and relaxing in a deck chair 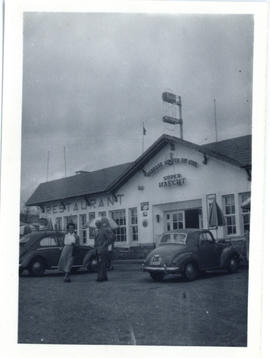 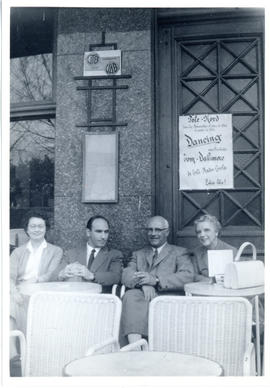 Photograph of Maureen Beren, the courier Angelo, Thomas Head and Edith Raddall sitting on an outdoor patio in Luxembourg City 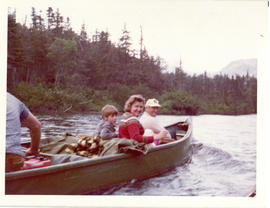 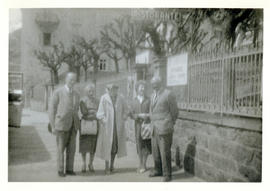 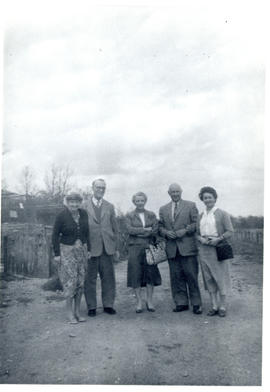 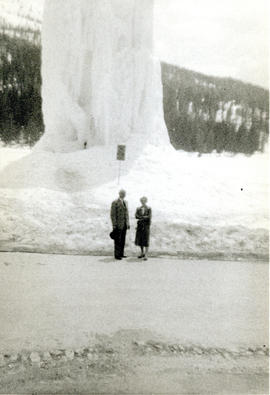 Photograph of Thomas Head and Edith Raddall in front of a frozen fountain in the Dolomites, Italy 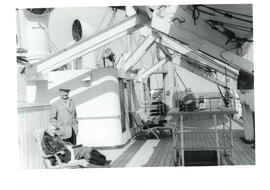 Photograph of Thomas Head and Edith Raddall on the boat deck of the S/S Nova Scotia, en route from Halifax, Nova Scotia to Liverpool, Engand 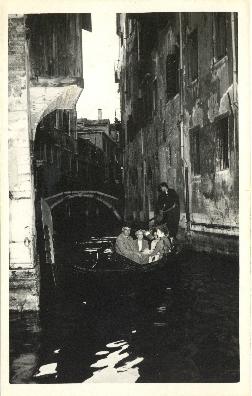 Photograph of Thomas Head and Edith Raddall riding a gondola in Venice, Italy printed on a postcard

Item, a photograph, is related to MS-2-202, Box 54, Folder 11, Item 5 and MS-2-202, Box 55, Folder 22, Item 12 in subseries Thomas Head Raddall's loose photographs. The photograph was taken at dusk when the Raddalls were on their way to their hotel. The Raddalls can be found on the left side of the boat.

Photographic negatives from the Raddalls' 1958 trip to Newfoundland and Europe

File contains photographs taken during a TightRope trip to Bar Harbour, Maine, in 1995.

Photographs with family and friends, including vacations

File contains various photographs belonging to Joyce Barkhouse depicting her family (including Margaret Atwood), friends, and travels. These include a trip to Oberammergau in 1980 with Mary Wade, Mildred Smith, and Frances Brown, as well as trips to London and Newfoundland. Some of the photographs are scanned onto black and white sheet of paper in batches, while others are originals.

File contains one copy of Places for Men Guide 1988, which provides a directory of businesses for gay men in the United States, Canada, Caribbean, and Mexico.