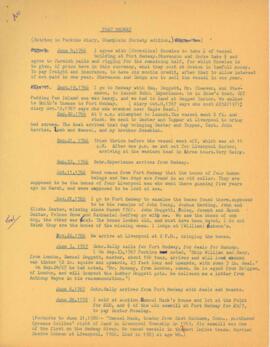 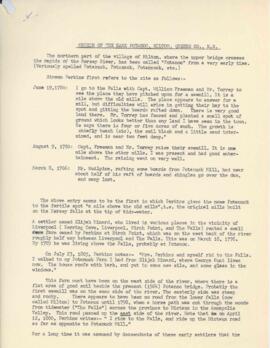 Item consists of chronological research notes on the origin of the name Potanoc (variant spellings include "Potanuck," "Potanack," and "Potannock"), related to Queens County. 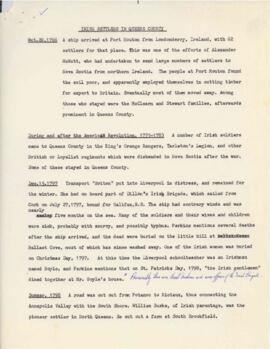 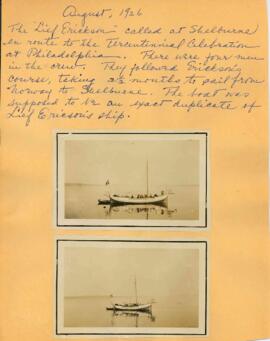 Item consists of photographs and research notes related to a visit by the ship Lief Erickson to Shelburne in 1926. 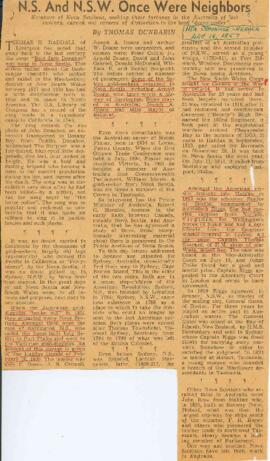 "Nova Scotians in the Gold Rush to Australia and Tasmania" 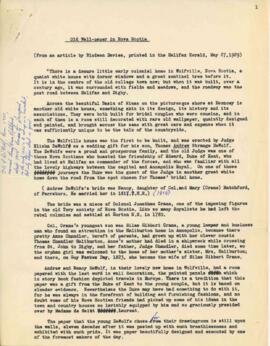 File contains an adaptation of an article of the same title written by Blodwen Davies, printed in the Halifax Herald, May 27,1929, with handwritten notes by Raddall. File also contains an associated article "They Play House with Antiquity" by Claire Van Wart. 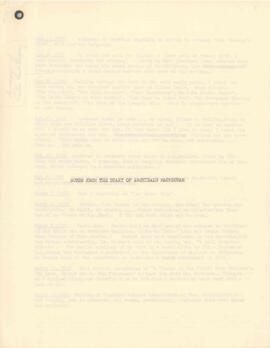 "Notes from the Diary of Archibald MacMechan" 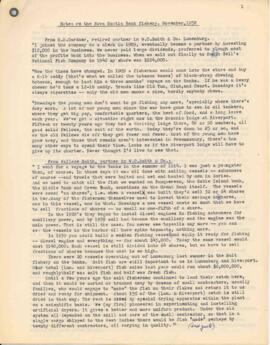 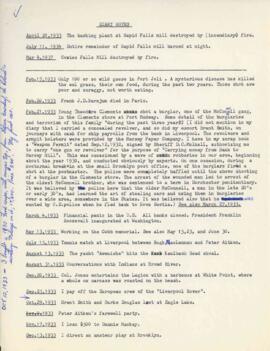 Item contains excerpts from Raddall's diary, covering the period of February 17, 1933 to September 9, 1939. 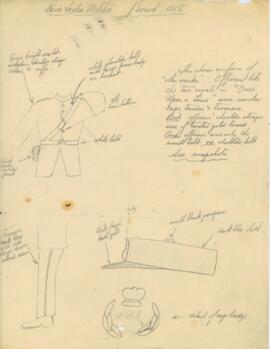 Item consists of labelled hand-drawn sketches of militia uniforms. One is of Kirby Stevens' uniform (of the Volunteer Rifle Company).

This file consists of notes for the family history profiles and correspondence from relatives.

The winds are blowing in my head / by Eber Morse

Research and other relevant articles

File contains research notes and manuscript drafts. Also includes some of Alexander Leighton's other articles on illness prevention and community development and rehabilitation.

Series contains materials related to the development of Alexander Leighton's book on the prevention of mental illness. Documents include manuscripts, correspondence, research notes, and copies of past publications.

Notes on the biological survey

File contains one notebook with loose note and correspondence tucked in.

File consists of a notebook with pages on cotton-tail rabbits.

File contains notes on and descriptions of character sketches from St. Lawrence Island in Alaska.

File consists of communications, research notes, newspaper clippings, and boat racing information to be used in writing an article on the history of log canoes.

File contains notes and an outline for a film on occupational therapy. Also includes correspondence regarding the film.

File contains notes and manuscripts for various projects titled "The wreck of the Aspiration," "A walk in the woods," and others.

File contains correspondence with or about George Roper. Also includes a manuscript for "The teacher's role in relation to sociological and psychological stress," discussion transcriptions, and an outline for a case-finding device.

File contains correspondence with or about Courtenay M. Harding. Also includes information on interpreting lifecharts and patterns of recompensation in schizophrenia.

File consists of notes on residential data and psychiatric ratings.

RIDIT calculations for 1961 and 1963 Yoruba studies

File consists of notes on data calculations and statistics from the 1961 and 1963 Nigerian studies.

File contains notes and data tables analyzing data from the 1961 and 1963 Nigerian studies.

Subseries consists of datasets, statistical analysis, and correspondence regarding sample comparisons from the 1961 and 1963 Nigerian studies.

File contains a copy of the study "Psychophysiological reactions of a rural and suburban population in Taiwan" by Hsien Rin, Hung-Ming Chu, and Tsung-Yi Ling. Also contains correspondence between Hsien Rin and Jane Murphy and notes and data tables on modernization rates and number of children among respondents.
Results 1 to 50 of 654