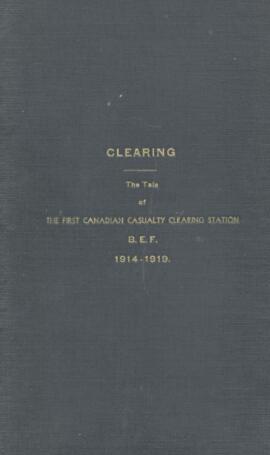 Item is a bound typescript of "Clearing, the Tale of the First Canadian Casualty Clearing Station, B.E.F., 1914-1919" written by Thomas Brenton Smith. The typescript is inscribed by Smith to R. Robart, V.D.

From the accounts of the first few days, the jump off point must have been somewhere near Mahone Bay or Lunenburg, on the southern coast of Nova Scotia. Few observations are recorded during the first week; the aim seems to have been to reach an initial destination of Grand Manan Island. At this point, beginning on July 25, 1684, detailed observations are made of all islands, rocks, and other geographical objects, along with more specific information concerning water depths (given in braces), types of currents, prevailing winds, distances between landmarks (given in leagues), places of secure anchorage, danger zones, etc. Most of the observed areas are accompanied by topographical illustrations which depict not only the contours of the coastline, but also elevations from sea level.

The expedition proceeded from Grand Manan Island down into Passamaquoddy Bay (this is not named, but the St. Croix River is), then Northeast along the coast of New Brunswick to the entrance to the St. John River. At this point, the expedition encountered at least two British war vessels, equipped with cannons. An envoy from the expedition was sent to the British ships, apparently commanded by John Nelson, the nephew of the first proprietor of New Brunswick; assurances are exchanged, the envoy is returned, and the expedition again proceeds along its way. Much of this portion of the expedition was obscured by a dense and persistent thick fog which made the task of the cartographer at times impossible, as he frequently notes.

From St. John River, the expedition turned back again across the Bay of Fundy, along Long Island, down along the Western coast of Nova Scotia to Cape Sable. This destination is reached by July 31, 1684, and here some days are passed waiting out a violent storm. Another British ship is mentioned, though no contact was made. The coastline from Cape Sable all the way to Margaret's Bay is represented by numerous illustrations. The weather seems to have been more favourable, and much of the area was apparently uncharted.

Appended to the journal is a twelve page "Inventaire pour servir a l'armament et consommation du nav(igation)," in which a very detailed list of hundreds of items is presented. The two categories that receive the most attention are boat fixtures (e.g., sails, bowsprites, halyards, stays, topsails, masts, anchors, rope, riggings, etc.) and armaments (e.g., cannons, ammunitions, guns, other weapons, etc.). Surgical equipment is briefly mentioned. Extraneous observations are also included from time to time: an abundance of fish off Cape Forcheau; arborage and foliage on shore; disembarkments, during one of which one of the crew apparently attempted to desert.

Item is a notebook containing twenty sailors' ballads, one popular song and two song fragments written in at least two different hands. There is also a brief diary entry outlining Fenwick Hatt's movements between 1883 and 1885.

Item is an account of the Izaak Walton Club of Dalhousie University, written by John G. Aldous in 1984. The account chronicles the fishing trips and other activities of some prominent individuals in Dalhousie's history. The account was compiled by Donald Gordon in 2013.