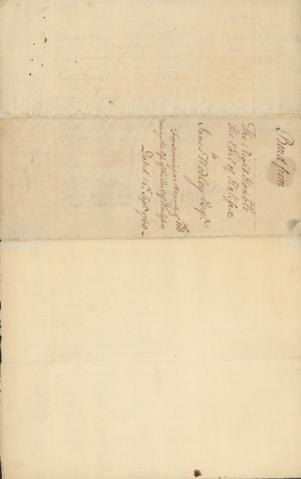 George Montagu-Dunk was the 2nd Earl of Halifax, succeeding his father in 1739. Born in 1716, he was educated at Eton College and at Trinity College, Cambridge. He was married in 1741 to Anne Richards (d. 1753), who had inherited a great fortune from Sir Thomas Dunk, whose name George Montagu took.

From 1749 to 1761 he served as president of the Board of Trade. It was during his tenure in this position that he helped to found Halifax, the capital of Nova Scotia, which was named after him. He entered the Cabinet in 1757, was appointed Lord Lieutenant of Ireland in 1761, and also served as First Lord of the Admiralty.

Montagu-Dunk left office in July 1765, returning to the Cabinet as Lord Privy Seal under his nephew, Lord North, in January 1770. He passed away in 1771, having recently been restored to his former position of Secretary of State.

The item was accessioned by Dalhousie University Archives in 1971. Prior to that, the item was in the custody of E.N. Rhodes.

This documents was formerly in SF Box 18, Folder 34