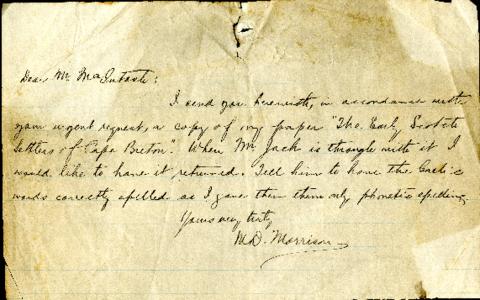 Morrison was licensed in Nova Scotia in 1895 and practised first in Reserve Mines and then in Dominion, Cape Breton. In 1899 he married Katy McDonald, with whom he had at least one son, Clarence Morrison. He moved to Halifax in 1917 to take up an appointment as the medical officer for the newly formed Workmen's Compensation Board, where he was primarily responsible for advising on permanent disability estimates. He retired from medicine in 1937.

Morrison was a member of the North British Society and the Nova Scotia Historical Society. He had a keen interest in the history of the Highland Scots in Nova Scotia and the work of the Gaelic College at St. Anne's and its annual Mod (Gaelic cultural competition). He wrote and published several historical articles, including Religion in Old Cape Breton, which appeared in The Dalhousie Review (1940), and The Migration of Scotch Settlers from St. Ann's, Nova Scotia to New Zealand, 1851-1860, in Collections of the Nova Scotia Historical Society 22 (1933). He died in Halifax on 14 May 1946 after being hit by a taxi.

Records were accessioned by Dalhousie University Archives in 1972. The custodial history is unknown.