Item is a report of the 2004/05 Nova Scotia stroke audit published by Cardiovascular Health Nova Scotia.

Correspondence and clippings relating to the Nova Scotia Arts Council

Correspondence from Linda G. McIntosh relating to the Sharla project

Correspondence regarding an arts and culture sector study

Correspondence with Cory Young relating to the Sharla project

Correspondence with Jim Smith relating to the Sharla project

Correspondence with Peggy Walt relating to the Sharla project

Item is a videocassette of a lecture by Liz McNaughton, an employee of the Nova Scotia Provincial Government. McNaughton attempts to make her overview of government programs health related. The video was requested by Kathy MacPherson from the Department of Community Health and Epidemiology. 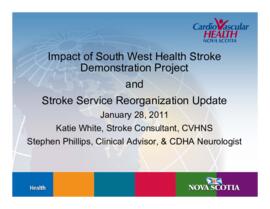 File contains information about the construction of items for Parks Canada, a paper called "Scenography" by Peter Perina, a short story called "The Annotated Women" by Robert Doyle, "The History of Competitive Sports and the Modern Olympics" by Robert Doyle, rejection letters from various Canadian and America book publishers, and correspondence about the deferral of Doyle's appointment to full professorship. The file also contains documents about Sheila Stivens and her position as Craft Officer with the Nova Scotia Department of Recreation, including letters to Sheila Stiven from various people, correspondence from Robert Doyle about her position, and her curriculum vitae.

File consists of the typescript and draft of a letter from Budge Wilson, to Jane Purves, Nova Scotia Minister of Education.

Subseries contains records created and collected by Gil Winham during his service on the Macdonald Royal Commission, which resulted in a recommendation that Canada enter into a free trade agreement with the United States. Record types include symposium and meeting agendas, minutes and notes; discussion papers; correspondence and memoranda; media releases and bulletins. Of note is a study on Canada-US sectoral trade written by Gil Winham, along with related records.

Subseries contains records created and collected by Gil Winham during his service as Chairman of the Nova Scotia Adjustment Advisory Council, which was established by Premier Buchanan to examine the province's capacity to adjust to the Canada-US Free Trade Agreement. Record types include correspondence; meeting agendas and minutes; research materials; background reports; media releases and newspaper clippings; manuscript drafts; and the final report.
Results 1 to 50 of 90