AIDS and the church

File is an audio reel containing an episode of The Word is Out, a program broadcast on CKDU radio 88.1. This episode features Lutheran minister Bob Petit speaking about AIDS and the church, as well as news and a community calendar. The episode was recorded and broadcast on November 16, 1987.

Series contains materials from the organization Churchmembers Assembled to React to AIDS (CARA or CARAS) and includes meeting minutes, financial records, correspondence, and educational materials. Fonds also contains records from two projects run by CARA: Morton House, a hospice for people living with AIDS, and AIDS-LINK, a project aimed at connecting people with AIDS to resources and support.

Churchmembers Assembled to Respond to Aids

Motion regarding a deed from the Baptist Temple Trustees

File contains a motion regarding a deed from the Baptist Temple Trustees to George C. Webster, Edward S. Manning, and Gordon B. Isnor. 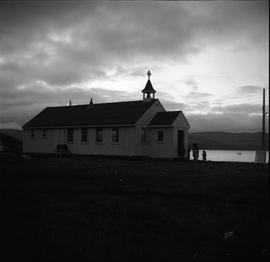 Photograph of a church in Wakeham Bay, Quebec

Item is a photograph of an Anglican church in Wakeham Bay, Quebec. The photograph was taken in the evening and they are some people standing by the door. 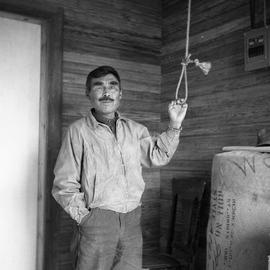 Photograph of a man with one eye ringing the bell at the St. Stephen's Anglican church in Fort Chimo, Quebec

Item is a photograph of an unidentified man with one eye who is pulling on the bell pull at St. Stephen's Anglican Church in Fort Chimo, Quebec.

Photograph of a news clipping of a Landscape photograph

item is a copy photo of a newspaper clipping from the "Standard", Montreal, Canada March 18, 1916, showing a rural landscape with the letter "X" marked in a field. The text reads in part: "An Historic Spot in Eastern Canada. - The "X" in the Standard's engraving marks the site of the barn in which the first meeting of the Pictou Presbytery in Pictou, N. S., was held. In this house Rev. George Monro Grant (1877-1902) Principal of Queens University spent many... " 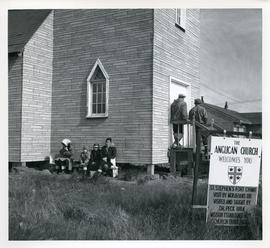 Photograph of several people waiting outside of the Anglican church in Fort Chimo, Quebec 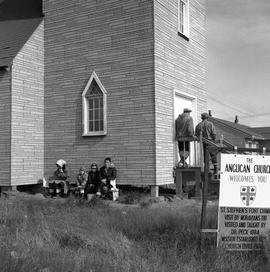 Photograph of several people waiting outside of the St. Stephen's Anglican church in Fort Chimo, Quebec

Item is a photograph of the St. Stephen's Anglican Church in Fort Chimo, Quebec. There are several people waiting on the front steps and on a bench next to the church. 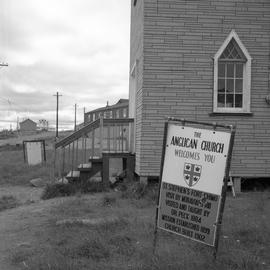 Item is a photograph of the Anglican church in Fort Chimo, Quebec. There is a sign in front of the church that says "The / Anglican Church / welcomes you / St. Stephen's Fort Chimo / Visit by Moravians 1811 / Visited and taught by / Dr. Peck 1884 / Mission established 1899 / Church built 1902."

The names of the people in the photo are listed in the back of the photograph.

Item, a photograph, is a photocopy of the portrait hanging in a church in Brooklyn, Nova Scotia. Reverend Duff was the father of Sir Lyman Duff, Canada's eighth Chief Justice.

Recording of an Anglican church service and other recordings

File contains a reel-to-reel recording of Barbara Hinds talking about the cost of transporting equipment; the sound of a church bell; and people singing a hymn at an Arctic Anglican church service.

Recording of an interview with Reverend Michael Gardner

File contains a reel-to-reel recording of Barbara Hinds' interview with Reverend Michael Gardner, an Anglican missionary in Cape Dorset. Gardner talks about the difference that Christianity has made to Inuit people and how the church got their organ.

Item is a recording of Barbara Hinds telling a story about an Anglican church that she attended in Cape Dorset, Northwest Territories. The story is about an Inuit man named Putuguk (uncertain spelling) who built the church, how the missionary Mike Gardner came to Cape Dorset, how his son Kananginak bought the organ for the church, and how Hinds ended up playing organ at the church.

File contains two reel-to reel tapes containing recordings of Barbara Hinds talking about the history of the church in Cape Dorset; a grade 2 reading lesson at a school in Frobisher Bay; students singing God Save the Queen; and Barbara Hinds interviewing Gordon Goward, a teacher in Frobisher Bay.

Pictures of Faith Tabernacle, the choir and Rev. Williams.

File contains a photograph taken during the Pope's Visit to the European Court of Human Rights in Strasbourg. Included with the photograph is an envelope listing the names of the individuals in the photograph.

Three letters from the Canadian Conference of Catholic Bishops

Two copies of The Story of Wesley Knox United Church, and a related letter