A time to act : a proposal to restructure child and adolescent programs and services, Nova Scotia

File contains a report written in 1973 by Alexander Murchison and Edward Newell regarding a restructuring of child and adolescent programs and services in Nova Scotia to "stimulate community and government interest, participation, and action for change."

Item is a videocassette of an interview with a patient, which was used in the curriculum for the Dalhousie Medical School.

Item is a draft manuscript written by Alexander Murchison and T.A.H. McCulloch (of Canadian Forces Hospital Halifax) in the early 1970s. The item addresses a case study of an 18-year-old "leading seaman, unmarried and of Ojibwa Indian extraction" admitted to the psychiatric unit of Canadian Forces Hospital in Halifax after a sudden onset of psychosis experienced by the patient shortly after his vessel left Halifax in 1968.

Item is a videocassette of a lecture on post-partum depression, recorded in Theatre B of the Tupper Building. The video was requested by Dr. Pierce from the Department of Psychiatry and was used in the Dalhousie Medical School curriculum.

File contains six reports, papers and proposals regarding child health, child welfare, and group homes in Nova Scotia, drafted between 1970-1975 by Alexander John Murchison and others.

Item is a videocassette with an interview. The interviewee received electroshock treatment for anxiety, depression, and paranoia. The treatment tested the effects of neurotransmission and effects of "shocking" lobotomies. The tape was requested by Dr. Jones from the Department of Psychiatry. 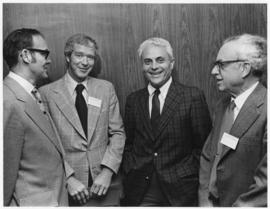 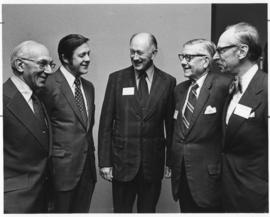 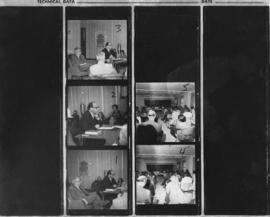 Item is a contact print with photos of Robert Orville Jones and Dr. Lidz. Photographs were taken by Wamboldt-Waterfield Photography Limited.

Photographs from the Dalhousie University Department of Psychiatry

Item is an early draft proposal written by Alexander Murchison and others in 1972 or 1973, regarding funding for a health grant to improve the delivery of health services to children and youth in Nova Scotia. The proposal accompanies a report entitled "A Time to Act."

Item is a videocassette of a videotaped psychiatry session. The session appears to be mock, although it could be genuine. The set-up is a two-shot of a therapist and a patient. The video was used in the Dalhousie Medical School curriculum and was requested by Dr. P.E. Reynolds from the Department of Psychiatry.

Item is a videocassette of a videotaped psychiatry session. The session appears to be mock, although it could be genuine. The set-up is a two-shot of a therapist and a patient. The video was used in the Dalhousie Medical School curriculum and was requested by Dr. P.E. Reynolds from the Department of Psychiatry.

Item consists of a draft typescript of a short paper outlining research regarding solvent inhalation addiction compiled by Dr. Alexander Murchison in February 1969. The item lists the substances most often used, outlines the "usual procedure" for inhaling solvents, addresses initial results and subsequent side-effects faced by those who engage in solvent inhalation, as well as determining the sort of person who may be susceptible to engaging in solvent inhalation.

Item is a videocassette of a narrated documentary, featuring the Nova Scotia Hospital in Dartmouth. It is part of the "New Beginnings" television program and was requested by Sylvie Gibeau. It was used as part of the Dalhousie Medical School curriculum.

The case of a pre-delinquent girl : girl in danger

Item is a videocassette of a classroom film by McGraw-Hill Contemporary Films. The video is a documentary with a real person as the subject. The video was used in the Dalhousie Medical School curriculum and was requested by Dr. J. Curtis from the Department of Psychiatry.