Pamphlet from Society for Political Action for Gay People Vancouver

File contains pamphlets from the Society for Political Action for Gay People Vancouver. 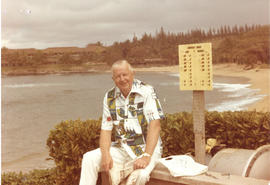 Photograph of G. MacGregor Grant on a beach near Victoria, British Columbia

Item, a photograph, is related to material in the In My Time [1976] subseries Correspondence G. MacGregor Grant.

Letter from the University of British Columbia Alumni Association

File is an audio reel containing an episode of Women's Time. This episode features an interview with Dr. Hillary Wass, hosted by Erin Goodman. Wass, a Vancouver doctor, gave a lecture at Dalhousie University on AIDS on November 18, 1987. The episode aired November 19, 1987.

File is an audio reel containing an interview with Doctor Hillary Wass, a Vancouver doctor who specialized in treating AIDS patients, on the tragedy of AIDS and watching so many of her patients die, as well as her work on behalf of the victims. The interview was conducted by CKDU's Robert Matthews. The episode was recorded on November 18, 1987, and was broadcast on the same day on The Evening Affair, a CKDU program.

Series consists of records regarding proposals for research and reports submitted to companies, research centres and government departments by MacLaren Plansearch Limited and Plansearch Inc.

File contains videos of an interview with Shan MacDonald. The interview was conducted by Anna Quon at the Belmont House in Darmouth, Nova Scotia on September 29, 2010. This was the eleventh interview conducted as part of the Our Voices Matter Project. The interview touches on a wide range of topics, including Shan's childhood in Victoria, British Columbia, her family life, experiences with manic episodes and depression, and other aspects of her personal life.

Correspondence with the Vancouver chapter of the Canadian Poetry Association (CPA)

Item is a full-body photograph of Norman MacKenzie posing on the University of British Columbia campus, with a smaller image of his head in the upper right corner.

Invitation to a luncheon in honor of Norman A.M. MacKenzie

Item is an invitation to a luncheon held on Friday, September 3, 1976 in Cecil Green Park in Vancouver, British Columbia. The card was included in a scrapbook of material about a bust of Norman A.M. MacKenzie at the University of British Columbia.

File contains the programme of a conference that explored adult learning, social movements and skills for active citizenship held at the University of British Columbia.

Patricia Monk's research correspondence re. her book The gilded beaver : an introduction to the life and work of James De Mille

Annual reports presented to the Pacific Sub-committee on Oceanography

File contains a report prepared by the Canadian Geoscience Council.

Papers of the SS Corfu Island

Notes to Vancouver round table talk

Promotional brochures for readings and workshops

File includes brochures for Budge Wilson appearances at the South Cowichan Branch Library, as part of a CANSCAIP workshop, and as part of the Annapolis Royal arts festival.

Correspondence and notes regarding reading at Richmond Public Library

Correspondence and notes regarding the Vancouver Storytelling Festival

File contains correspondence and notes relating to a reading by Budge Wilson on CBC radio from her new anthology of short stories "The Leaving."