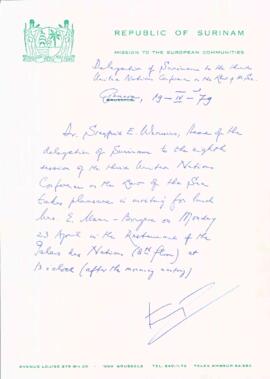 File contains correspondence with Gil Winham, Canadian External Affairs, and the Delegation of Suriname to United Nations Convention on the Law of the Sea (UNCLoS) III. File also includes a project proposal for "Science and Technology for Development and Disarmament," by Elisabeth Mann Borgese, and a report from the twenty-third United Nations General Assembly.

File contains an autographed program by the soprano Frieda Hempel. The program is for a concert that she gave with the Harvard Glee Club, conducted by Dr. Archibald T. Davison. The program includes pencil annotations by J.D. Logan. File also contains Logan's ticket stub from the concert.

The continuity between instinct and intelligence : [typed manuscript]

File contains a typed manuscript of an essay entitled "The continuity between instinct and intelligence", written by Kenneth Leslie while he was a student at Harvard University, likely in 1915. File also contains handwritten notes and remarks from Leslie's professor, "E.B.H.", presumably Edwin Bissett Holt, lecturer in Psychology.