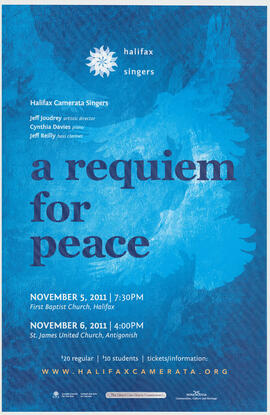 A requiem for peace with Jeff Reilly : [poster]

File contains two copies of a poster for a concert by the Halifax Camerata Singers in collaboration with Jeff Reilly on bass clarinet at the First Baptist Church in Halifax, Nova Scotia and the St. James United Church in Antigonish, Nova Scotia.

Two poses of one young woman, in one of which she is facing to the side; bust. Annotated: "Mount St. Bernard's"

One man seated on a carved chair, facing to the side; 3/4 pose

One man, looking to the side, standing with his hands in his pockets; 3/4 pose

One man wearing high collar, looking to the side; bust

Copy photo of one man seated; bust. Partial images of two women and one girl are also visible on the original plate

One baby standing in front of reversed wicker chair, with one hand on the chair; full pose

One baby seated on a stool; full pose

One young woman, looking to the side, seated; 3/4 pose. Address: Bay Street Antig

One girl seated in wicker chair and one younger girl standing on beside her; 3/4 pose

One young man wearing clerical collar and robes, standing facing to the side; 3/4 pose

One boy seated on one large dog; full pose

One boy and one large dog standing; full pose

Seven views of buildings and landscapes taken in Antigonish, laid out on a cloth-covered table with greenery and flowers between them, and a card annotated: "Souvenir of Antigonish". This may possibly have been taken to produce a postcard

View of the town of Antigonish, Nova Scotia, in the distance beyond a river, fields and trees

Landscape looking down on a street with many trees on both sides on which three carriages are driving. The sign on the closest building is thought to read: "LIVERY STABLE"

Merrimac House, a building with several men and women standing and seated outside, and one child on a bicycle

Group of 11 men; full pose. All have uniforms with A A A A on them, except one man in suit, likely the coach. Four players have gloves and three crossed baseball bats, two gloves and a catchers mask are arranged in front of the team

Group of 12 men, one seated on the shoulders of two others; full pose. Original envelope annotated: "Antig Base Ball Club", glass marked "A A A A"

Group of 10 young men; full pose. Seven have hockey sticks and upon one of which can be read the letters "A P". Three are wearing skates and shin guards

Group of 9 men; full pose. Four are wearing skates and three have sticks