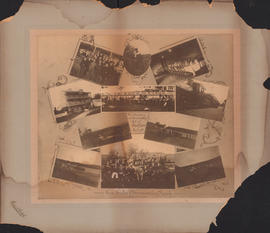 File contains a composite photograph consisting of several photographs taken at the Nova Scotia Pharmaceutical Association 25th anniversary and annual meeting held in Bedford on June 20th, 1901. The photographs include group photographs of attendees; attendees playing tug-of-war, baseball, and other games; a train; the Belle-Vue Hotel; and a dining room.

Correspondence between Dorothy and Samuel Shields and Mary E. Black regarding the Canadian Authors Association

Files contains correspondence sent by Samuel and Dorothy Shields to various recipients, including to Honourable Robert Henry Winter (Minister of Trade and Industry) and to Honourable Gordon Benjamin Isnor (Canadian merchant and parliamentarian).

Interview with Brian Molyno on archaeology and petroglyphs

File is an audio reel containing an interview with Brian Molyno, a Canadian archaeologist who works at Southampton University in England. While in Nova Scotia to look at petroglyphs in Bedford, he spoke with CKDU's Heather Hueston. The interview aired July 15, 1990 and was rebroadcast August 23, 1990 on Title Waves and August 24, 1990 on Artscape.

File is an audio reel containing a lecture by Dr. Ray Cranston of the Geology Survey of Canadaat the Bedford Institute of Oceanography. He delivered a lecture, entitled "The Uncertainty of Global Change," at the Discovery Centre in Halifax on September 25, 1992. The lecture aired on CKDU September 25, 1992 and was rebroadcast September 28, [1992] and April 4, 1998 on The Evening Affair. 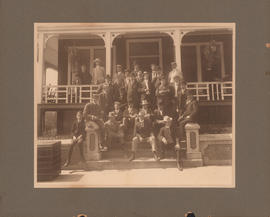 File contains a photograph taken at the Nova Scotia Pharmaceutical Society 25th anniversary and annual meeting. The photograph is a group photo taken on the steps of "The Sydney" in Bedford, Nova Scotia.

File contains letters from students and their teacher at Bedford Senior Elementary School, thanking Budge Wilson for her visit to their classroom.