At and language : panel discussion at Struts Gallery : part 1 of 2

At and language : panel discussion at Struts Gallery : part 2 of 2

Item is a compilation of recordings of various artists. The tape includes a paper insert that lists the artists and their works.

Side 2 includes excerpts from 12 talks and performances, compiled by Andy Dowden: "Social Criticism that Makes you Laugh" by Sheila Gostick (June 15, 1984); performance by The Palace at 4 A.M. (Ihor Holubizky, Walter Yarwood, George Higton) (March 10, 1984); "Scanner Training Seminar #2" by Ed Slopek (January 18, 1984); talk at the Nova Scotia College of Art and Design for the Atlantic Film and Video Festival by Jerry Mander (October 20, 1984); "Mexico City Blues" by Murphy's Law (Richard Gibson, Steve Tittle, Jim Faraday); "Art, Sexuality, and Censorship" by Varda Burstyn (April 4, 1984); performance at the Other Space by Beth Bartley and Marc Clifford (March 4, 1984); presentation by Robin Endres (June 11, 1984); performance at the Other Space by Clancy Dennehy and Dan Lander (March 4, 1984); talk by Jan Peacock at Struts Gallery (February 1984); audio installation by Hu Hohn (June 1984); and poetry at the Other Space by Clifton Joseph (June 8, 1984).

Contracts, programs, and other documents from Live Bait Theatre's production of "Relatively Harmless"

Letters in response to visit to grade 4 class in Sackville

File contains letters and drawings from the class about Budge Wilson's books.

Material for a talk at the Sackville Public Library

File contains correspondence and notes. The talk was for Canada Book Day.

File contains photographs taken during Live Bait Theatre's 2005 production of Relatively Harmless by Jenny Munday. The photographs depict cast and crew members performing on stage, posing outdoors, or working in the theatre. Some photographs are of the theatre or set pieces. Some of the photographs, taken by Lilith, are in a small plastic photo album.

Programs, contracts, and other documents from Live Bait Theatre's production of "Have you ever been to Bombay?"

File contains documents related to Live Bait Theatre's 2013 production of "Have You Ever Been to Bombay" by Elizabeth Goodyear, Jenny Munday, and Ilkay Silk. The documents include posters; flyers; correspondence between Goodyear, Silk, and Munday; a ticket from the production; programs; photocopies and computer printouts of reviews of the play; greeting cards; contracts; and ticket sale information.

File consists of various research materials on music collected by Anthony Pugh. The file includes the newsletter of the New Brunswick Registered Music Teachers' Association (January 1972); correspondence from the Institute for Bach Studies; list of music positions and organizations in the Fredericton area; a chronological list of music compositions; and two program notes written by Anthony Pugh.

File consists of students drawings, from Mrs. Ward's Grade 4 class in Sackville, New Brunswick, of Victor the boa constrictor, as represented in the poem Victor by Budge Wilson. Includes a letter by Budge Wilson.

File contains a draft of "The Bunk Beds" by Jenny Munday, completed in winter 2016 in Sackville, New Brunswick. There are handwritten notes throughout the draft.

File contains a draft of "The Bunk Beds" by Jenny Munday, completed in August 2015 in Sackville, New Brunswick.

File contains a draft of "The Bunk Beds" by Jenny Munday, completed in June 2014 in Sackville, New Brunswick. There are highlighted sections throughout the draft. The file also contains a legend of scenes from the play.

File contains a draft of "The Bunk Beds" by Jenny Munday, completed in November 2015 in Sackville, New Brunswick. There are handwritten notes throughout the draft. 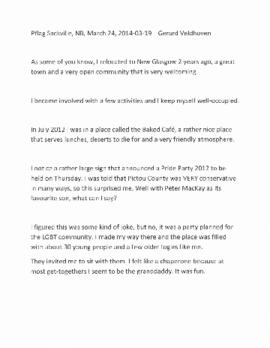 Typescript of a speech presented to PFLAG in Sackville, NB

Item is the typescript of the speech presented by Gerald Veldhoven at PFLAG in Sackville, NB, on March 24, 2014. 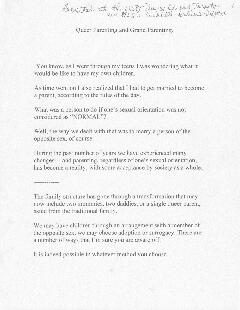 Typescript of the speech "Queer Parenting and Grand Parenting"

Item is the transcript of the speech present by Gerald Veldhoven at the LGBT Senior Group in Toronto on July 19, 2010, and PFLAG in Sackville, NB, on January 24, 2011.

File includes correspondence with the school.