Fonds contains minutes of the Dalhousie Association of Graduate Studies as well as photographs, correspondence and other records relating to the establishment and management of the first purpose-built graduate student social facility (the Grad House). 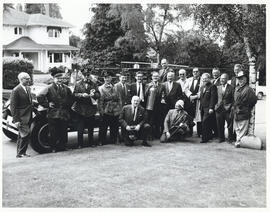 Photograph of members of the Canadian Medical Society in Vancouver

Photographs of a Yoga Classes at the YMCA