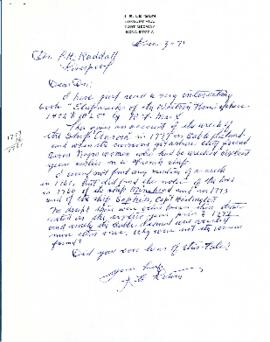 File contains an undated hand-made Christmas card sent to Kenneth Leslie by Leslie's grandson Charles, the son of his daughter Rosaleen Dickson, sometime in the early 1970s. The front of the card depicts a winter sledding scene drawn in pencil, while the interior contains a typed three stanza (12 line) poem beginning "I've travelled here from midnight till noon!", and a handwritten holiday salutation to "Grandad, and Nora!" from Charles.

File contains a thank-you card (with an Eileen Waring illustration to the front) and letter written to Kenneth Leslie, by his granddaughter Priscilla (daughter of Kathleen). File expresses Priscilla's thanks for a gift from Kenneth and Nora, her appreciation of Leslie's poems when she is feeling down (particularly "Promise", transcribed in its entirety), and her decision to choose the surname "Jamison", "because it was an old family name".

File contains a handwritten letter created by Florida L. Byrne (of Tacoma, Washington) dated May 15, 1973, and sent to Kenneth Leslie. Letter gauges Leslie's interest in receiving copies of U.S. Farm News (whose publisher, Fred Stover, "spoke very highly of [Leslie] in one of his letters". Letter also expresses appreciation for receipt of a copy of Leslie's self-published poetry anthology "O'Malley and the Reds and other poems. Finally, letter inquires to the interest in Leslie's receipt of a few books from Mrs Byrne's personal collection.
Results 1 to 50 of 4000