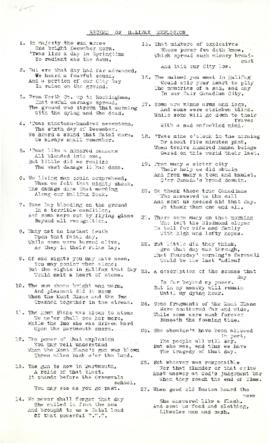 File contains a photocopy of a poem by Clare Hall.

Letter to Jenny : [booklet of poetry]

File contains a booklet of poetry written by Phillip Stewart Thompson and sent as a letter to Jenny Munday. The booklet contains some photographs and drawings. A newspaper article about Thompson's death is also included in the file.

Meeting agenda about the W.H. Dennis Memorial Prizes for Literary Compositions in English and the Clare Murray Fooshee Poetry Prize

The pensioner, a poem by Herbert Eugene Greenough

The bold young oysterman, a poem by Herbert Eugene Greenough

The tryphena's extra hand: a shelback yarn, a poem by Herbert Eugene Greenough

The farmer's boy, a poem by Herbert Eugene Greenough

File includes a second copy of the poem "The pensioner" written by Herbert Eugene Greenough. File also contains a transcript of the original handwritten poem typed by Allan James Chapman.

The pearl inside the body / Allan Cooper

The pearl inside the body : poems selected old and new : [manuscript]

The guest touches only those who prepare / Edward Gates : [manuscript]

The guest touches only those who prepare / Edwards Gates : [annotated manuscript]