Item is a special "graduation number" issue of the Dalhousie Gazette published in 1911. The issue contains brief bios of all of the graduation class as well as photographs.

Special Convocation for the Installation as Chancellor of C.D. Howe - 1958 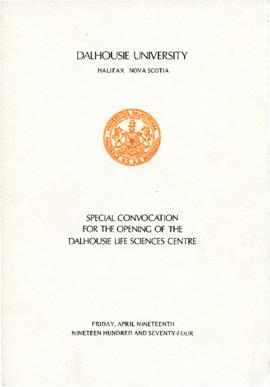 Item consists of two copies of a program from a special convocation for the opening of the Dalhousie Life Sciences Centre. The program contains the order of proceedings and transcripts of citations given during the presentation of honorary degrees to the Honourable Allan Joseph MacEachen, William Edward Ricker, George Isaac Smith, and Robert William Stewart.

File contains photographs of the Queen Mother's arrival in Halifax and her attendance at the grand opening of the Tupper Building at Dalhousie University.

Item consists of five graduation portraits from the Dalhousie University class of 1988 attached to a sheet of paper. The students are unidentified.

Item consists of five graduation portraits from the Dalhousie University class of 1988 attached to a sheet of paper. The students are unidentified.

Photographs of Henry Hicks and others at 1980 convocation ceremonies

Photographs from the opening of the Weldon Law Building

File contains photographs taken at the opening of the Weldon Law Building at Dalhousie University, including the unveiling of a plaque in honour of Sir James Dunn and the dedication of the Sir James Dunn Law Library. The photographs show Lady Beaverbrook, Henry Hicks, Horace Read, and other guests.
Results 1 to 50 of 504