Collection is comprised of materials created by, collected or about the TightRope Brotherhood.

File contains one hand-painted banner produced by the Gay and Lesbian Association (GALA) for the 1995 Halifax Pride parade. Banner is painted on a white piece of fabric, and features pink text outlined in black that reads "PRIDE '95". Banner also features two black circles filled with pink triangles on either side of the text.

File contains one banner for Atlantic Provinces Political Lesbians for Equality (APPLE), used in a Halifax Pride parade. Banner is made of a white bedsheet with black fabric letters reading "APPLE" sewn on.

File contains one banner produced by the Gay and Lesbian Association (GALA), then called the Gay Alliance for Equality, for the 1985 pride march. The banner is made of white fabric, and is drawn in the style of a Gaezette article. The banner features a drawing of a person standing in front of a windmill proclaiming with a headline that reads "Send a Dyke to Holland".

File contains one printed banner produced by the Gay and Lesbian Association for Halifax Pride Week 1992. Banner is a piece of white fabric printed with black text that read "WE ARE FAMILY—HALIFAX PRIDE WEEK 1992", featuring a large image of a pink triangle overlayed four interlocked venus and mars symbols.

File contains one hand-painted banner produced by the Gay and Lesbian Association (GALA). Banner is made from a brown piece of fabric and a white piece of fabric sewn together, and painted with black text that reads "Every person is free & equal in dignity & rights — NS Human Rights Act".

Gay and Lesbian Association (GALA) straight but not narrow banner

File contains one hand-painted banner produced by the Gay and Lesbian Association (GALA). Banner is a white piece of fabric that features black and red text that reads "STRAIGHT but NOT NARROW" over top of a pink triangle.

File contains one handmade banner produced by the Gay and Lesbian Association (GALA). Banner is a tie-dyed piece of white fabric with handwritten text in marker that reads "In Memoriam—Killed by Nazis—Killed by AIDS—Killed by Halifax—QUEER BASHERS", with tombstones drawn next to each line of text displaying the years during which members of the LGBT community were killed by each respectively entity.

File contains one white banner produced by the Gay and Lesbian Association (GALA) for the 1990 Halifax Pride parade featuring the text "We are family! Lesbian and Gay Pride 1990" and two interlocking venus symbols painted in overlapping black and pink text.

Item is an informational brochure and campus map of Dalhousie University.

This volume consists of the Certificate of Incorporation; a memorandum of association; the Articles of Association; the shareholders' Resolution; registers; ledgers and minutes of the Board of Directors and financial statements. This volume also contains examples of share certificates.

Newspaper clipping on the history of Oland Breweries in Halifax, Nova Scotia 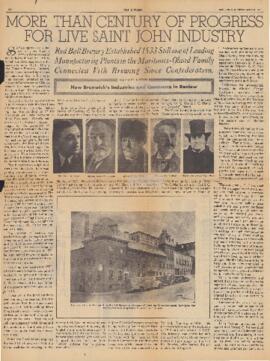 Correspondence between Bruce S. Oland and Funding Co-ordinator for the Sackville Sports Stadium

Fonds consists of reports and studies on Nova Scotia farming and marketing between 1924-1990. It also includes papers, correspondence, photographs, a newspaper article, and signs created and collected by Gordon Kinsman during his research of berries in Nova Scotia between 1965 and 1991.

Series contains papers, correspondence, photographs, and signs created and collected by Gordon Kinsman during his research of berries in Nova Scotia between 1965 and 1991.

Series consists of reports and studies on Nova Scotia Farming and marketing, published by Gordon Kinsman between 1924-1990.

Third annual announcement of the Nova Scotia School of Horticulture

Series consists of booklets and other textual records related to agricultural education and social recreation published between 1895-1989.

Acetate negatives for You are here dance, A fantasy in black and white, and Winter's solstice dance events

File contains acetate negatives for posters for the You Are Here Women's and Men's Dance, A Fantasy in Black and White New Year's gala, and Winter's Solstice Men's and Women's Dance events at Rumours bar.

File contains pamphlets and educational materials produced by the National Gay Task Force, and one document of unknown origin entitled 20 Questions on Homosexuality.

File contains a pamphlet from Birthright, a Christian organization that provides assistance to expecting mothers and discourages abortions.

File contains one copy each of the 1983 and 1993 guidelines for GayLine volunteers. File also includes three copies of a 1993 pamphlet advertising the Gay, Lesbian and Bisexual Line's services.

Series contains administrative records for the GayLine, established in 1972. GayLine was renamed to the Lesbian, Gay and Bisexual Line in 1994. Materials in this series include GayLine monthly and annual reports; call logs and templates; staff notebooks; correspondence; memos, minutes, and a certificate of incorporation relating to the name change; and notes.