File contains correspondence related to persons or organizations associated with the letter "G". These include Moira Ferguson at the University of Guelph, Thomas Gridley at the Roche Institute of Molecular Biology, and the Golden Key International Honour Society. Materials include reports from Hall's lab and lecture outlines.

File is an audio reel containing an episode of Earth Action, a radio program broadcast on CKDU radio 88.1. This episode features Guelph 2000, which was started in 1993 to encourage City of Guelph residents to undertake a wide variety of conservation related actions in their homes. It also includes information on a Clayoquot Sound caravan. The episode aired on August 11, 1993, and was rebroadcasted on August 12, 1993, and August 13, 1993 on The Evening Affair, CKDU's evening public affairs radio program. 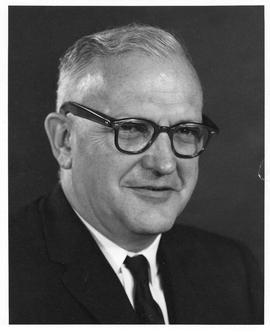 Photograph of A. W. Needler

Item is a photograph of Dr. A. W. Needler, resident director of the Huntsman Marine Laboratory in Guelph, Ontario.