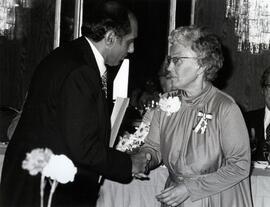 The Writers' Federation of Nova Scotia (WFNS) is a non-profit charitable organization established in 1975 to foster creative writing and the profession of writing in the province of Nova Scotia. Its mandate is to provide advice and assistance to writers at all stages of their careers; to encourage greater public recognition of Nova Scotian writers and their achievements; and to enhance the literary arts in both regional and national culture. Membership is open and advocacy available to both professional and developing writers.

The Executive Committee are elected by the membership and serve two-year terms. They serve the purpose of a board of management with the traditional responsibilities of officers of a non-profit service organization, and are responsible for the policies and general management of the Federation.

The Federation also serves writers and readers in the community, publishers, editors, teachers, librarians, and representatives of the book industry.

The Federation continues to augment and improve its advocacy and public relations efforts and programmes (including the development and administration of major book awards for the Atlantic region), and to work in concert with other regional and national writers' and publishers' groups for the benefit and growth of the industry.

The Nova Scotia Recreation Department provided the initial funding under its program for assistance to cultural associations.

The Archives of the Writers' Federation of Nova Scotia consists of records created by the administration, members, and affiliates of the Federation. It includes a wide variety of materials including administrative records, audio/visual material, correspondence, financial records, meeting agendas and minutes for a variety of groups and committees, photographs, promotional and press material. The records refer to the adminstration and functions of the Federation, as well as its relationships with its members, government departments, and other writing, publishing and cultural groups.

Materials are mainly in English, with a small number in French. See individual Series descriptions for detailed scope and content notes.

Photographs of members and events

Some series are further divided into sub-series. Files within each series or sub-series are listed chronologically, unless otherwise specified.

English, with some French interspersed.