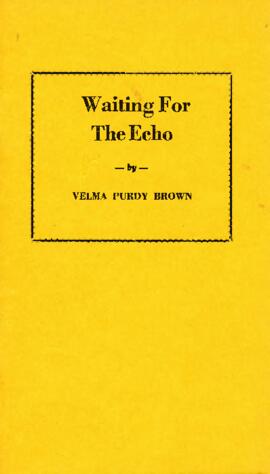 Velma Purdy Brown was born in 1915 in Truro, the eldest daughter of Gordon Dencil and Elsie Mae (Talbot) Purdy. After finishing school she worked at Truro Printing and Publishing and Margolian's Department Store. In 1940 she married Frederick Cameron Brown and in 1964 moved to Dartmouth and Halifax.

Brown was active and involved in the arts, her church, and charitable activities. A prolific writer of poetry and prose for her own pleasure, she also contributed to various local church publications. She was involved in producing newsletters and other materials, particularly relating to the United Amateur Press Association (UAPA). Her own poetry flourished from 1971-1979 when she had her work published in many UAPA and other publications. Brown died in 2009.

Fonds was donated by Velma Brown in 1979.