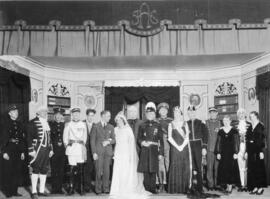 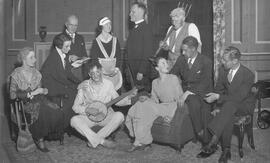 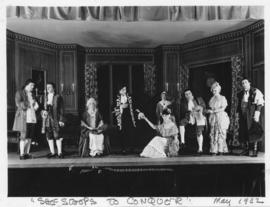 The Theatre Arts Guild is a community (amateur) theatre company Halifax, Nova Scotia. It was formed from by the amalgamation of two local groups, the Halifax Dramatic and Musical Club and the Little Theatre Movement in March 1931. Its first performance space was located in a building on the corner of Coburg Road and LeMarchant Street. In 1935, the Theatre Arts Guild rented space from the Navy League on the corner of Barrington and South Streets until Theatre Arts Guild suspended productions in 1939, when the Royal Canadian Air Force seconded the TAG Playhouse for its own use. The activities of the Guild continued throughout World War II, with the presentation of concert parties and entertainment for the troops passing through Halifax on their way to Europe. Dramatic presentations resumed after the War, and the Theatre Arts Guild subsequently obtained new premises on College Street (the former College Street School). Performances were staged there until a fire on January 25, 1959 destroyed the building. In 1966, the Guild moved to a former church hall in Jollimore (renamed the Pond Playhouse), which remains its permanent home.

The Theatre Arts Guild mounts five productions a season, and over they years has taken several on tour to theatre festivals in Canada and abroad. The Guild has also regularly participated in the Liverpool International Festival and Provincial One-Act Play Festival. Two workshops, a Poetry Reading and Variety Night fill out the regular schedule. The Theatre Arts Guild Young Company, which ceased operations in the fall of 1987 with the departure of Ken Schwartz (co-founder of Two Planks and a Passion Theatre Comany), took its productions to schools, hospitals, and day camps during the summer in the Halifax-Dartmouth area.

This collection consists of records regarding Theatre Arts Guild's management and productions from the establishment of the guild in 1931 to 1999. Materials include administrative documents and some financial records, programs, posters, newsletters, histories of Theatre Arts Guild and information about amateur theatre in Halifax, correspondence, photographs, newspaper clippings, and scrapbooks.