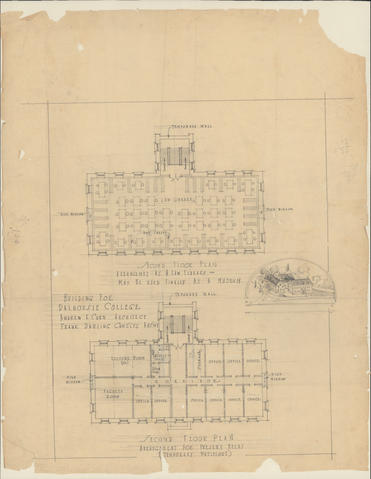 Technical drawing of a building for Dalhousie College

Andrew Cobb was born in the United States in 1876. At the age of 14, he moved to Greenwich, Nova Scotia, with his mother and sister. After graduating from Acadia University he earned a master’s degree in architecture from the Massachusetts Institute of Technology before moving to Paris to study at the Ecole nationale des Beaux-Arts from 1907–1909.

He began practising in Halifax in partnership with Sydney P. Dumaresq, whom he had met at Acadia, collaborating on the memorial tower, known as the Dingle, erected in Sir Sandford Fleming Park in 1912. Cobb went on to become known for his domestic architecture in Halifax and Bedford, as well as for institutional designs such as Dalhousie University's Science Building, Macdonald Memorial Library and the University of King’s College, constructed on the Studley campus of Dalhousie from 1928–1931. He died in 1943 in a motor accident.

Frank Darling was born in 1850 in Scarborough Township to William Stewart Darling and Jane Parsons. Darling was educated at Upper Canada College and Trinity College. He worked briefly a a bank teller before becoming the apprentice of architect Harry Langley in 1866. Around 1870, he moved to London, England to train with architect George Edmund Street. Darling returned to Toronto in 1873 and set up a private practice in partnership with Henry Macdougall. He later formed partnerships with Samuel George Curry, Henry Sproatt, and John A. Pearson. Some of his most well-known works are the Toronto Club, the Victoria Hospital for Sick Children, and several bank branches across Canada.

Item is a technical drawing of a building for Dalhousie College. The building may be a suggested building that was never built. The drawing shows two versions of the second floor plan, including an arrangement for the college's present needs (offices, faculty room, and lecture room) and an arrangement for a law library that may be later used as a museum.

Drawing is encased in plastic.