File contains photographs of events and activities at the Nova Scotia Agricultural College with people present in frame. People include students, faculty, and dignitaries. Photos include posed (as for calendar publication), class photos; event photos such as building dedications, graduation parades, students at play, at study, at work. Most photos are between the decades of the 1950's to the early 1980's. 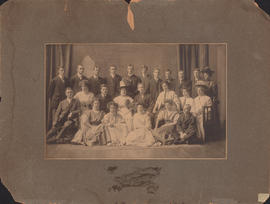