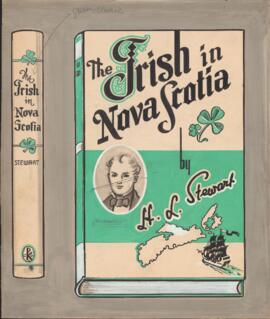 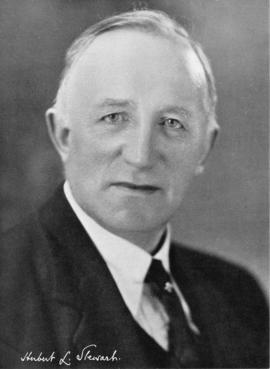 Herbert Leslie Stewart was born in County Antrim, Ireland, on 31 March 1882 and was raised in Carrickfergus, near Belfast. He received his MA (1905) and PhD (1907) degrees from Lincoln College, Oxford, where he was awarded the John Locke Scholarship in Mental Philosophy. Stewart later took up the Cobb Scholarship at Edinburgh University, taking classes in Divinity, followed by a junior fellowship in Mental and Moral Science at the Royal University of Ireland and then a lectureship in Moral Philosophy and the History of Philosophy at Queen’s University, Belfast. In 1913 Stewart was appointed George Munro Professor of Philosophy and Head of the Department of Philosophy at Dalhousie University in Halifax. He continued to teach after his retirement in 1947 and was appointed Professor Emeritus in 1951.

Stewart wrote extensively across a broad range of subjects, including philosophy, religion, history and literary criticism. His books include Questions of the Day in Philosophy and Psychology (1912), Nietzsche and the Ideals of Modern Germany (1915), Anatole France: The Parisian (1927; reprinted 1979), A Century of Anglo-Catholicism (1929), Modernism Past and Present (1932), From a Library Window (1940), The Irish in Nova Scotia (1949), and Winged Words: Sir Winston Churchill as Writer and Speaker (1953). In addition, he completed two unpublished book-length manuscripts: Thomas Carlyle (ca. 1923) and Repulse to Chaos and the Road to Recovery (ca. 1944). Stewart also published many articles in scholarly and popular journals across North America and Europe.

In addition to his scholarly writing, Stewart was a frequent contributor to newspapers, magazines and radio, where he commented on politics and current events. In 1919-1920, he wrote about provincial and city issues in an anonymously penned column, "Man About Town," for the Halifax Evening Mail. In 1922 he was employed by the Halifax Herald as a special correspondent to cover the Cape Breton coalfields labour dispute. He remained a regular columnist for the Herald throughout the 1920s and 1930s. From 1931-1950 Stewart made weekly broadcasts for CHNS, then Nova Scotia's most widely-received radio station. He also provided a Sunday-night commentary on world affairs for the Canadian Radio Broadcasting Corporation (later the CBC) from 1931-1947.

In 1921 Stewart founded The Dalhousie Review and remained its editor for 26 years, overseeing its development into an internationally-recognized interdisciplinary quarterly and frequently contributing articles on contemporary issues. He was elected a fellow of The Royal Society of Canada in 1921 and of The Royal Society for the Arts in Britain. He served as President of the Halifax Charitable Irish Society and also presided over the Halifax branch of the Overseas League. He died on 19 September 1953.

The materials were donated to Dalhousie University Archives in five accessions. The custodial history of the first two accessions, which took place in 1970 and 1993, is unknown. Records donated in 2007 were previously in the custody of John G. Stewart. The 2010 and 2011 accessions were transferred from Nova Scotia Archives under the Provincial Cooperative Acquisition Agreement.

Fonds is arranged into seven series, with additional subseries determined by genre.