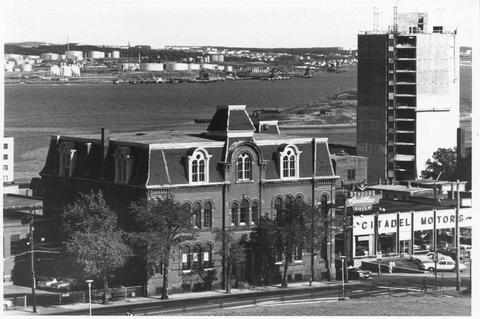 George Van Vliet Nicholls, QC was born on October 25th, 1908 in Montreal, Quebec to Dr. Albert George and Lucia Pomeroy (Van Vliet) Nicholls. The family moved to Halifax, Nova Scotia in 1915 where Nicholls graduated from the Halifax County Academy with the highest standing in his class. He went on to Dalhousie University, and then transferred to McGill University his junior year, later graduating with honours in English literature in 1929 and a civil law degree from McGill in 1932. Nicholls was admitted to the Quebec Bar that same year and practiced law for a few years in Montreal. The Nicholls family had returned to Montreal in 1927.

Nicholls went on to work in the legal and industrial relations departments at the Toronto head office of the Canadian Manufacturers’ Association in 1937. He was commissioned by the Royal Canadian Air Force in 1941, and was the first sectary and chairman of the K.R. (Air) Revision Committee. In 1943, he joined the staff of the Judge Advocate General’s Brach in London and transferred to the Reserve in December, 1945.

While at Dalhousie, he taught administrative law and labour law. He also originated and taught the courses, the Introduction to the Private Law of Quebec and Legal Research and Writing which is still part of the curriculum and became a model for legal research and writing courses at other law schools across Canada. Nicholls also assisted in the creation of the Dalhousie Law Journal, which was first published in September, 1973 and served as one of the original editors and was on the editorial board. He’s been published in multiple legal journals and reviews writing on topics covering administrative and common law, labour law and Quebec law and was the author of The Responsibility for Offences and Quasi-offences under the Law of Quebec.

Nicholls was a member of the Senate Committee, and chairman of the Art Gallery Committee and Dalhousie University’s General Committee on Cultural Activities. He was also one of the people responsible for the concept and planning of the Dalhousie Arts Centre. Nicholls also served as chairman for the public relations of the Waegwoltic Club.

George V.V. Nicholls was married to Patricia “Pat” Ross and had one daughter, Anne. Nicholls died on August 9, 1986 in Halifax.

Item is a photograph of the former Halifax High School, which was also the first home of the Dalhousie Law School. The building is next to a car dealership and a tower under construction.

A note on the back of the photograph reads: "Entrance to former Halifax High School / First Home of Dalhousie Law School / Taken by George Nicholls / Friday, September 10, 1976"