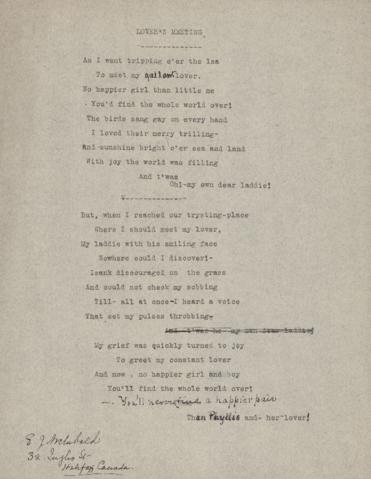 Edith Jessie Archibald, née Archibald, was born in St. John's, Newfoundland and educated in New York and London, England. She married Charles Archibald (1845-1929) in 1874. In 1893, they moved to Halifax, Nova Scotia. Although she began her social activist work in Port Morien, Cape Breton where they lived previously, most her involvement in social activism dates from her time in Halifax. She was president of the Maritime Woman's Christian Temperance Union (1892 -1896); the Local Council of Women (1896-1906); and the Halifax Victorian Order of Nurses (1897-1901), and vice-president of the Nova Scotia Red Cross (1914). She was also heavily involved in the suffragist campaign and led the suffrage delegation to the legislature in 1917. During her lifetime she published many pamphlets, songs, plays, and books. She died in 1938 and is buried at Camp Hill Cemetery in Halifax. In 1997, she was designated a "Person of National Historical Significance" by the Government of Canada for her work to promote women's rights.