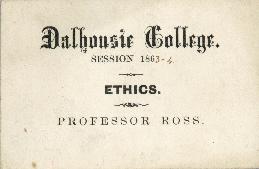 Ticket to an ethics class at Dalhousie College

Item is a ticket to an ethics class taught by Professor Ross at Dalhousie College during the 1863-1864 session. James Baxter's name is written on the back of the ticket. The ticket is in a white envelope with Baxter's name written on it.

Teaching medical ethics : a report on one approach

Correspondence between Susan Sherwin and Dalhousie University re. her faculty appointment

Correspondence between Susan Sherwin and Dalhousie University re. her employment and salary

Research for feminist research : women and philosophy, vol. 16, no. 3

Canadian Federation for the Humanities applied ethics network correspondence, letters of intent, and directory of centres of excellence

Toward a Canadian research strategy for applied ethics : a report by the Canadian Federation for the Humanities : [page proof]