A hero for centennial : [photocopy of an article in the Atlantic Advocate]

Item is a photocopy of "A Hero for Centennial" by Barbara Hinds, published in the August 1967 issue of the Atlantic Advocate. The article is about Inspector Francis J. Fitzgerald. The article includes several photographs. 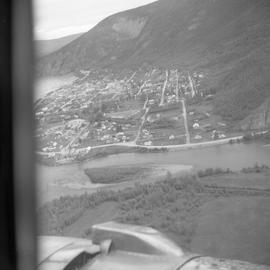 Item is a photograph taken from an airplane flying over Dawson City, Yukon. Mountains and the beginning of the Klondike River are visible. 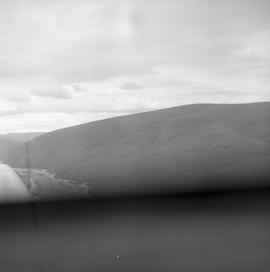 Aerial photograph of a mountain near Dawson City, Yukon

Item is a photograph taken from an airplane flying over Dawson City, Yukon. The mountain next to Dawson City is visible but most of the view is obstructed.

File contains a map of Baffin Island and Frobisher Bay from Culbertson Island to Koojesse Inlet. The map shows the soundings in fathoms for this area.

Biomass allocation in ten Saxifraga species in the high Arctic : [manuscript and other materials]

File contains the manuscript written by Freedman and J. Stewart for the Freedman-edited volume "Ecology of a Polar Oasis". File also contains draft manuscripts and correspondence.

Birds and mammals of Alexandra Fiord and vicinity : [manuscript and other materials]

File contains a booklet of information about the Royal Canadian Mounted Police Yukon Centennial; correspondence with P. J. Greenlaw and D. Snowden; handwritten notes about Labrador; typed notes from a visit to Stadacona in 1966; a typed draft of an article about fitness and a canoe trip; a photograph MacKenzie Porter at the luxury hunters' camp at Cape Dorset, taken by Rosemary Gilliat; a photograph of a boy learning to write at Frobisher School in 1960, taken by Rosemary Gilliat; and maps of the Yukon.

Series includes maps, booklets, correspondence, newsletters, and other documents related to Barbara Hinds’ interest and travels in the Canadian Arctic.

Collision in the Arctic : [manuscript]

File contains a photocopy of a manuscript called "Collision in the Arctic," written by Barbara Hinds. There are corrections on the manuscript as well as separate pages of editing suggestions. The last three pages are originals, not photocopies. The file also includes correspondence about the manuscript from the MacMillan Company of Canada Limited, Rosemary, Shannon Perry, and Mike Eaton; comments and suggestions for photographs from Rosemary Gilliat Eaton; and a description of a 1960 visit to the eastern Arctic, as told to Michael Eaton by Barbara Hinds in 2008.

Correspondence with McClelland and Stewart Limited and others

File contains three spiral-bound diaries kept by Barbara Hinds between July 12 and August 25. The diaries records Hinds' activities during a trip to the eastern Arctic. 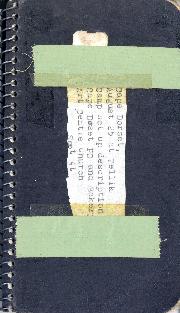 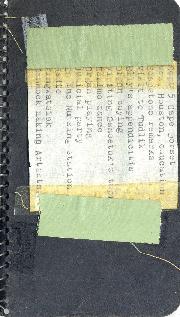 File contains a spiral-bound diary kept by Barbara Hinds between July 25 and July 31. The diaries record Hinds' activities during a visit to Ikkudliayuk Fjord.

File contains a spiral-bound diary kept by Barbara Hinds between October 1960 and November 1960. The diary contains rough notes about the eastern Arctic, travel, and interviews.

File contains a diary kept by Barbara Hinds between September 22, 1960 and October 22, 1960. The diary is typed or handwritten on loose pages of lined notepaper and records Hinds' travels in the eastern Arctic. The file also contains a list of names and birth dates of families in Cape Dorset as of March 10, 1960. 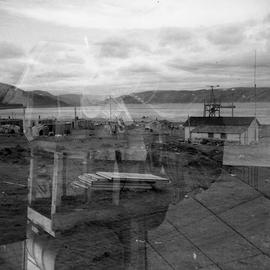 Item is a double exposure photograph of several small houses by the water in a town in northern Quebec, probably Fort Chimo. The second exposure shows a man with some kind of equipment but the image is not clear. 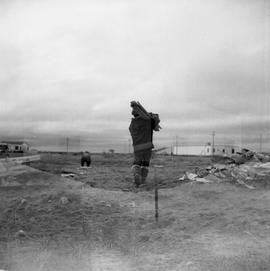 Item is a double exposure photograph taken in northern Quebec, probably in Fort Chimo. The photograph shows an unidentified man carrying a bundle of boards on his shoulder. The second exposure shows a hill or a roof of some sort but it is not clear.

Drafts of articles about Eskimos and other material

File contains a draft of an article about George and Joanna Koneak; a newspaper clipping of "Ookpik's Success Seen as Boon to Eskimo Co-ops" by Alan Dawson Jr.; and several pages of typed rough drafts about Inuit people. The rough drafts have many corrections written on them and the pages have been cut into sections and sometimes reattached.

Ecology and health of communities dominated by Cassiope tetragona at Alexandra Fiord, Ellesmere Island, Canada : [manuscript and other materials]

File contains the manuscript (co-edited with Josef Svoboda; containing 31 articles, of which 15 were co-authored by Freedman), as well as correspondence and records related to funding the project.

Effects of experimental crude oil spills on Taiga and tundra vegetation of the Canadian Arctic : [manuscript]

File contains the manuscript written by Freedman (as W. Freedman) and T.C. Hutchinson, for the Conference on Prevention and Control of Oil Pollution; San Francisco, 1975.

Effects of fertilization on three tundra plant communities of a polar desert oasis : [manuscript and other materials]

Effects of habitat on variations of phenology and nutrient concentration among four common plant species of the Alexandra Fiord lowland : [draft manuscript and correspondence]

File contains the draft manuscript written by E.J. Woodley and J. Svoboda, for the Freedman-edited volume "Ecology of a Polar Oasis". File also contains correspondence from Freedman, outlining "extensive modifi[cations]" made by Freedman to the draft.

File contains a hand-drawn map of Northern Quebec. The map is a rough outline of the province with points that indicate official posts and regional surveys.

File contains a map of the Hudson Strait, including northern Quebec, Baffin Island, Ungava Bay, and Hudson Bay. The map shows the soundings in fathoms for this area. There is a patch attached to the centre of the map, either to repair a hole or to make a correction.

File contains the manuscript written by Freedman (as W. Freedman) and T.C. Hutchinson, for the Circumpolar Conference on Northern Ecology, Ottawa, 1975.

Information about the Avataq Cultural Institute and other material

Life of an Eskimo : welfare cheques and high-stake card games

File contains a page from the March 28, 1970 issue of the Globe and Mail. The page contains an article called "Life of an Eskimo: Welfare cheques and high-stake card games" by Malcom Reid.

File contains a typed list with some items checked off. The items may be titles of photographs, interviews, or articles.

File contains the draft manuscripts written by W. Maas, B. Hoisington, and M. Nams, for the Freedman-edited "Ecology of a Polar Oasis", with many additions and edits by Freedman.

Materal for talk to the Antiquarian Society about Eskimo clothing

My friend Emily : [recording of Barbara Hinds telling a story]

File contains a reel-to-reel recording of Barbara Hinds telling a story about an Inuit woman named Emily who she met during her trip to Killiniq Island.

Negatives of photographs from Fort Chimo, Quebec and other locations

File contains negatives of photographs taken during a trip taken by Barbara Hinds to northern Quebec in September of 1965. The photographs were taken in Fort Chimo, Povungnituk, Sugluk, and Wakeham Bay. Most of the photographs are of people from these towns. The photographs also show churches, houses, other buildings, construction sites, cars, and boats.

File contains letters from Murray Cunningham about a trip to Nova Scotia for students from the eastern Arctic, which took place from May 20 to May 30, 1972. The letters were sent to guests and hosts for the trip. The letters contain a list of the students participating in the trip, a schedule of events, and addresses and phone numbers of the hosts. Barbara Hinds was one of the hosts.

Item is a newspaper clipping of part of an article about Francis J. Fitzgerald, the Lost Patrol, and Fitzgerald's mother. Part of the article is missing. The date, author, article title, and newspaper name are unidentified, although it was probably published in a Halifax Newspaper.
Results 1 to 50 of 888