My love she walks not with me : [manuscript]

File contains a handwritten manuscript of a song entitled "My love she walks not with me", with words and music by Kenneth Leslie, undated (but written presumably in the mid-1930s, after the collapse of his first marriage). The song is written in F-major, contains 24 bars of music in treble, and begins with the lines "The fragrance of the hawthorn and the rose after rain / Makes my misery completer". Music and words are written on only one page.

Item is a poetry copybook kept by Annie Prescott Duff, with entries made in various hands. 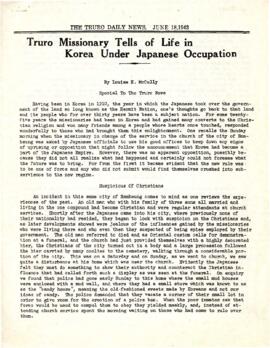 Photographs of the Dalhousie Law School class of 1929

File includes a photograph of Ronald St. John Macdonald with a group of unidentified individuals taken in the 1970s and a portrait of an unidentified man taken in 1988.

File includes a photograph of the Dalhousie University Weldon Law building fire of 1985.

Photographs of the Minister of National Defence visit to the Eastern Arctic, Greenland and Goose Bay

The Halifax Club constitution and rules with list of members : [book]

The art gallery in the factory

File contains event invites received by Ronald St. John Macdonald's throughout his life. File includes a letter of appointment for the position of consultant with the journal Economy and Law Press.

File includes newspaper clippings about Ronald St. John Macdonald's work and his writings, including the articles "security council memberships", "fishing zones", "Canada-US disputes needs new solutions", "important step forward at Western", and "individual rights overlooked in quest to protect groups". File includes two issues of the University of Toronto Versity News periodical of 1967, an issue of the University of Toronto Staff Bulletin of 1968, and the issue vol. 77, no. 3, of October 1997, of the McGill News periodical which contains an article mentioning Mairi St. John Macdonald, and other materials. File contains a letter from Ronald St. John Macdonald to Craig Scott related to lunch arrangements.

File includes an article about Mildred MacDonald's time at Dalhousie University, newspaper clippings of a poem by E. Anne Ryan and of an advertisement of the opening of the Park Lane building in Halifax, three art pieces regarding Canada's landscape, invitations, a Dalhousie University programme of a symposium on undergraduate education, and other materials.

File includes a handwritten account written by someone linked to the House of Assembly of Nova Scotia and signed by Derek.

The Canadian who's who : [book]

File contains two issues of the book and one of the issues includes a newspaper clipping about Angus Macdonald.

File includes a handout about Wilfrid Laurier, E.M. Macdonald, and W.S. Fielding, stating them as the liberal leaders in Canada and Pictou County.