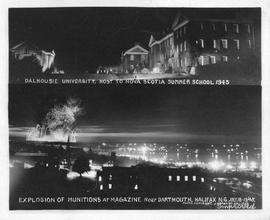 Item consists of a photograph of Dalhousie University's Studley Campus, host to Nova Scotia Summer School in 1945, and a photograph of an explosion of munitions at a magazine near Dartmouth, Nova Scotia on July 18 or July 19, 1945. The two photographs have been printed together on one sheet of photo paper.

Photographs of Studley campus and buildings