Fonds comprises administration, publicity and production records of 2b theatre company since their inception as Bunnies in the Headlights Theatre in 1999. Records types include manuscripts, correspondence, programs, posters, playbills and photographs.

A card from Thomas Raddall 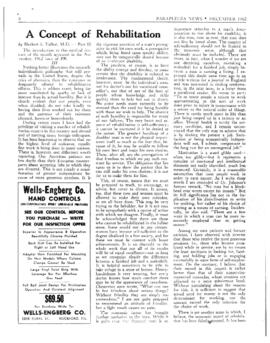 Item consists of a copy of the article "A concept of rehabilitation", written in 1962 for Paraplegia News by Herbert S. Talbot, sent by Don Curren to Barbara Hinds. Item also includes correspondence between Curren and Hinds from 1977, related to the included article.

A fiddle for Angus : final draft and note to agent Leona Trainer

File contains the final draft of Budge Wilson's children's story "A Fiddle for Angus," and a note to her agent, Leona Trainer, about the draft. The file also contains the typescript of a short story entitled "My Heroine, Murphy Brown," by Budge Wilson (undated), which was included in the anthology "Friendships" (2006).

A letter and a book of poetry from Margaret Atwood

A letter certifying participation in a National Council of Teachers of English program, a note confirming attendance at UKRA 6th Annual Congress, and explanatory notes from Barkhouse

A letter from Canadian Discoverers regarding The Lamplighter

A letter from Dorothy Fax of Holt, Rinehart and Winston of Canada, Limited

A letter from HH Marshall Limited regarding the Book Review Awards

A letter from Marian M. Wilson, president and editor in chief at Simon and Pierre Publishing Company, Limited

A letter from Nancy Marcotte, editor at Arnold Publishing Limited

A letter from Sheila Bucher, assistant fiction editor at The Family Herald

A letter from Sylvia Gunnery of the South Shore Literary Club

A letter from Terrence Cole, Editor of The Alaska Journal

A letter from the Canadian Authors Association

A letter from the Canadian Library Association

A letter from the Cultural Federations of Nova Scotia

A letter from the Dartmouth Regional Library

A letter from the Nova Scotia Teachers College

A letter to "Connie"

A letter to Herta Funk, Editorial Department of the Junior Messenger

A letter to "Kari"

A letter to Mary Lou Funk, associate editor of Contact

A letter to Michael Davis of Irwin Publishing Incorporated

A letter to Monic Berube

A letter to Perrin Beatty, Minister of Communications

A letter to Peter Carson, Commissioner General designate of the United Nations Pavillion

A letter to the Canadian Government Travel bureau

A letter to the editor of The Pictou Advocate

A manuscript of Some Famous Nova Scotians and related correspondence

File contains ten issues of The Canadian Boy, which includes the serial publication of "The Purple Cloak" by Joyce Barkhouse.
Results 1 to 50 of 3921