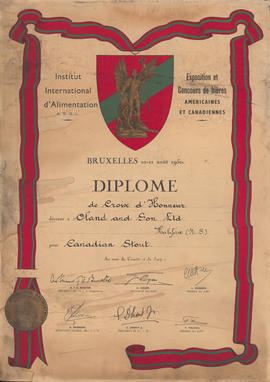 Item is a the Diplôme de Croix D'Honneur given to Oland and Son Ltd. by the Institut International D'Alimentation for their Canadian Stout. The diploma was awarded in August of 1950 during the Exposition et Concours de Bières Americaines et Canadiennes in Brussels. The diploma is illustrated with a red and green ribbon, a crest with a figure on it, and the seal of the Institut. The diploma is signed by the six members of the jury.

Correspondence re. Exhile, an unpublished manuscript by Marq de Villier

File includes readers' reports and letters of rejection from publishers including McClelland & Stewart, House of Anansi and Farrar, Straus & Giroux. 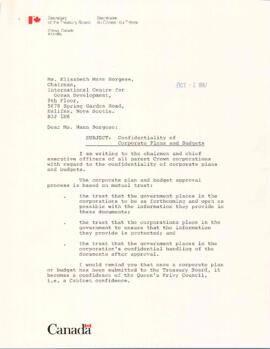 File includes correspondence with the Treasury Board, the United Nations Conference on Trade and Development (on a shipping seminar), and Finance Minister Michael Wilson (with Robert R. de Cotret).

Subseries contains materials created by Gil Winham for use in developing and implementing Exclusive Economic Zone (EEZ) and Law of the Sea (LOS) training simulation exercises.

The World Academy of Arts and Science pamphlet

File contains a pamphlet with basic information regarding the World Academy of Arts and Science.

World Academy of Arts and Sciences directory of fellows

World Academy of Arts and Science

Subseries consists of Ronald St. John Macdonald's records regarding his involvement with the World Academy of Art and Science. Subseries contains printed materials, news releases, administrative records, and other materials.

File contains a draft version of the manual developed by John H. Proctor.

Subseries consists of Ronald St. John Macdonald's records regarding his involvement with the International Law Association. Subseries contains reports, correspondence, and other materials.

File contains materials related to the conference organized by the Cyprus Bar Council.

Observation on the legality of the Cyprus government since 1963 as a matter of municipal and international law / Loukis G. Loucaides

Newspaper clippings regarding the Republic of Cyprus

Report of the United Nations mediator on Cyprus to the secretary-general : [booklet]

Cyprus and its constitutional and other legal problems / Criton G. Tornaritis

File includes three issues of the periodical from the period between 1978 and 1980.

Draft constitution of the Federal Republic of Cyprus

File contains the report submitted by the right honourable Lord Radcliffe to the secretary of state for the colonies to parliament by command of Her Majesty.

Cyprus in brief / Public Information Office of the Republic of Cyprus : [booklet]

Research materials regarding the revision of the Republic of Cyprus constitution

Cyprus currency: chapter 197 of the laws

File contains an annotated issue of the Cyprus currency: chapter 197 of the Laws.

Ronald St. John Macdonald's records regarding the reform of the judicial control mechanism of the European convention of human rights

Ronald St. John Macdonald's transcripts of the speeches delivered during the pope John Paul II's visit to the European Court of Human Rights

File contains transcripts of the speeches delivered by C.A. Norgaard, Pope John Paul II, and Rolv Ryssdal during the Pope's visit to the European Court of Human Rights in Strasbourg.

Ronald St. John Macdonald's records regarding the Council of Europe committee of ministers

Ronald St. John Macdonald's records regarding the Council of Europe European Commission for democracy through law

File includes Ronald St. John Macdonald's article "protecting human rights in emergency situations: making article 15 work", a Council of Europe committee of experts for the improvement of procedures for the protection of human rights meeting report, and other materials related to the subject.

Ronald St. John Macdonald's records regarding the Council of Europe sixth international colloquy about the European convention on human rights

Ronald St. John Macdonald's records regarding the Council of Europe's human rights at the dawn of the 21st century meeting

File includes reports presented in the interregional meeting organized by the Council of Europe in advance of the world conference on human rights.
Results 1 to 50 of 990