File comprises Dalhousie's academic calendars for the 1920-1921 to 1923-1924 sessions. Calendars include information such as time tables, important academic dates, courses of instruction, degree requirements, fees and scholarship opportunities and examinations for the Faculty of Arts and Science, Dentistry, Medicine and Law, as well as matriculation exams and dates. They also contain lists of the members of Senate, the Board of Governors, academic staff and students, as well as outlining the history of the university, its regulations, societies and facilities.

Two architectural elevation drawings for the Institute for Resource and Environmental Studies buildings by G. Edward

File consists of two copies of two architectural elevation drawings of the front facades for the Institute for Resource and Environmental Studies buildings located at 1308 and 1318 Robie Street, Halifax, N.S.

File consists of: one copy of an issue the Dal Magazine dated Winter 2014; and two copies dated Fall 2014.

Postcards of Dalhousie University buildings, the University of King's College, and the Nova Scotia Archives

File consists of the yearbook Artifacts:Technical University of Nova Scotia (TUNS) for the year 1988.

Andrew Cobb drawings of the Science Building at Dalhousie University 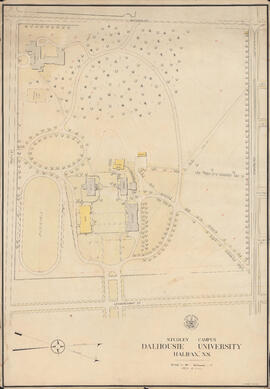 Item is a map of Dalhousie University's Studley Campus.

Certificate of Appreciation to Dalhousie from White House Communications Agency

File consists of one volume of the Dalhousie University School of Physiotherapy yearbook for the year 2011.

Ask Us - A guide to experts at Dalhousie University

Luncheon in Honour of the Canada Council - Invitation

Adopted at the Meeting Held at McMaster University.

File is a subject file on Bertha Wilson, a Dalhousie Law School alumnae (LLB ’58, LLD ’80) who was the first female puisne justice of the Supreme Court of Canada. File contains a portrait of Wilson and two newspaper clippings.