File is an audio reel containing five songs made between July 25, 1980 and August 11, 1980 by New Glasgow High School Bands.

File contains one spiral bound stenographer's notebook containing handwritten notes from 1994 and 1997 bird surveys in Trafalgar. Each page contains a tally of birds for a certain area.

File contains a watercolour painted and signed by Kenneth Leslie, presumably in the late-1930s. The painting depicts a rural setting -- quite likely of somewhere in Pictou County -- with a brown fence in the fore-ground, a narrow peninsula stretching into a river, with low hills in the distance.

Stationery from The Protestant and The new Christian

Correspondence and notes regarding visit to East Pictou Rural High

Notes and correspondence regarding a visit to Walter Duggan Consolidated School

File consists of correspondence and an invoice.

File consists of the typescripts of electronic email messages and letters of Budge Wilson regarding a talk at the Read by the Sea event held in River John, Nova Scotia, July 19, 2008. Includes the program for the event with two publicity flyers.

Prospectus and reports of the Montreal and Pictou Coal Company

File contains a prospectus and two reports of the Montreal and Pictou Coal Company. 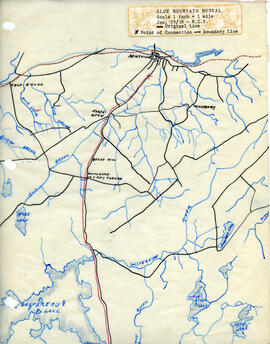 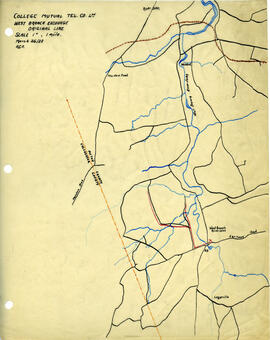 File contains 28 receipts and one envelope for the Bill Lynch Shows from June - August, 1951. Some of the receipts are for services including "grind shows", "girl shows", and "esquire." The locations include Moncton, Campbellton, Charlottetown, Lunenberg, New Glasgow, Fredericton, Amherst, Woodstock, Halifax, Saint Stephen, and Saint John.

File contains one blueprint for the assembly of the deck plates for the Whip, a ride held by the Bill Lynch Shows. The blueprint is from Maritime Steel and Foundries Limited, New Glasgow, Nova Scotia.

Photographs from an unidentified event in New Glasgow, Nova Scotia

File contains a portrait photograph of a young Miss. Carruthers seated, 3/4 pose, wearing a hat, coat with fur collar and cuffs and a fur muff.

Photograph of Mrs. D. F. Black and her son File contains a portrait photograph of Miss. Christie Cameron seated, 3/4 pose. Her name was etched on the plate as "Camron".