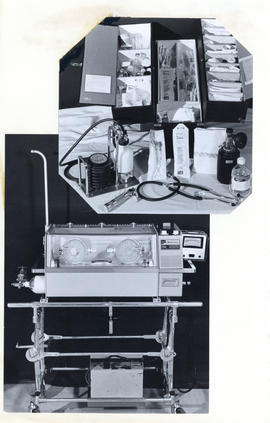 File is two photographs cropped and glued to sheet used as mockup for MeDal publication page 10, 1973.

File is a photograph of the Health Science Complex at Memorial University of Newfoundland under construction. The photo was published on page 14 of the 1973 edition of MeDal by Medical Dalhousie Alumni. 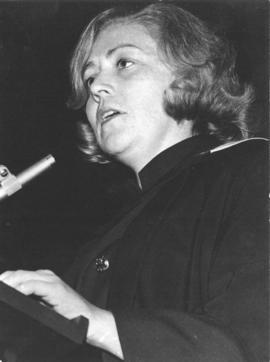 File is a photograph of the Faculty of Medicine 1972 Class President Mary G. Hickman. Photograph was published in MeDal publication by the Medical Dalhousie Alumni on page. 21 in the 1973 issue.

Subseries contains partial and full annotated drafts, photographs, and published works by Owl's Head Press, including Jonathan Wright's "After the Image," Robert Bly's "Ten Poems of Francis Ponge Translated by Robert Bly & Ten Poems by Robert Bly Inspired by the Poems of Francis Ponge," Leigh Faulkner's "Where the Fields End," and Edward Gates' "The Guest Touches Only Those Who Prepare." 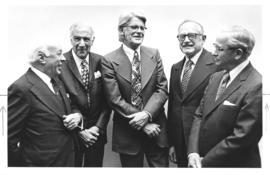 File is a photograph of retiring chairmen for a health-related board use in the 1974 edition of MeDal. Photograph was published in the 1974 edition of MeDal by the Medical Dalhousie Alumni. Chairmen identified, left to right: President Hicks; Dr. Clennel Evelyn van Rooyen; Dr Lloyd MacPherson (Dean of the Dalhousie Faculty of Medicine); Dr. James Soloman Hammerling; and Dr. Richard Loraine de Chasteney Holbourne Saunders.

Photograph and negatives for the poetry collection Where the fields end