Copies of various official documents from the Tupper family, including land surveyor's certificate and reports, certificates appointings Nathan and Freeman Tupper as Justice of the Peace. Originals date from 1863-1928.

Draft Letter to the Editor of the Halifax Herald regarding the origins of Hockey and skating in Nova Scotia, and various names the game was once called.

File contains manuscript regarding Robert Barry, foreman of the Grand Jury in 1812.

Regarding the European discoverers such as Columbus who first came to North America. 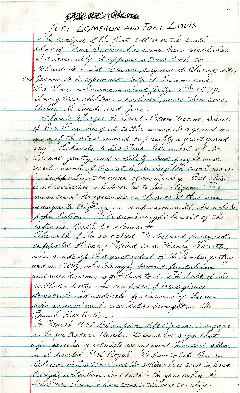 History regarding two forts which were located in Nova Scotia.

On the postulated origins of Freemasonry.

File contains a manuscript regarding war from 1793-1801 and the impact on Nova Scotia and relations with the United States.

A collection of writing on various topics of Liverpool history, including large amounts of marine history.

A twelve year old girl's encounter with a bear in 1825.

Includes thoughts regarding Charles La Tour, when and how he came to Acadia.

Regarding the history of Acadie/Acadia, where place names were derived from, and so on.

Includes excerpted text from Richard Hakluyt, regarding the West Indies.

Regarding the history of the Micmac people near the area of Milton, N.S. Includes discussion on the native origin and meaning of many names used for places, rivers, and lakes within Nova Scotia.

Regarding 18th Century politics and politicians in Liverpool and the Halifax area.

Regarding New England pilgrim settlers' activity in the fur trade.

Incomplete portion of a manuscript about an incident in 17th Century Nova Scotia, regarding the English and French, and who had claims to the land.

Historical anecdotes partially about press gang warrants in Halifax, and partially about the unfortunate wedding day of Andrew and Mary Mitchell in 1805, who had rotten eggs and vegetables thrown at them, along with dead cats.

Regarding a bridge built in the 18th Century to span the Liverpool river.

A humorous Liverpool story about George Eaton, a 19th Century naval officer, and events which happened with his fiance, Anne, and a stolen boat.

Anecdotes regarding a freshwater spring in the Liverpool region.

Some historical anecdotes regarding 18th and 19th Century Liverpool, including those regarding the judicial process, and Freemasonry in Liverpool.

Leaves removed from a book, includes information about prominent Liverpool families, ownership of boats, events in the year 1860.

Typed copy of “Minutes of the Proprietors of Liverpool Township – 1760”.

Includes vocabulary/translation notes for words in Welsh, Irish and Micmac, family trees, family histories, and a drawn map of Liverpool.

A notebook from when Tupper attended Dalhousie College in 1909. Subject is Chemistry, includes general class notes and hand-drawn diagrams.