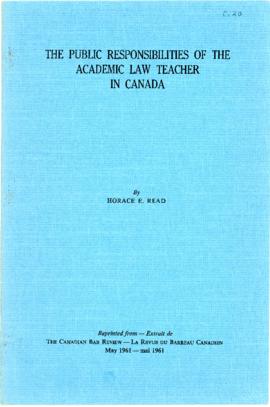 Horace Emerson Read, OC, QC, was an eminent legal educator and scholar and Dean of Dalhousie Law School from 1964-1972.

Born on 8 April 1898 in Port Elgin, New Brunswick, he moved with his family in 1911 to Amherst, Nova Scotia, where he graduated from Cumberland County Academy in 1915. In October 1915 he began his studies at Acadia University, but in 1916 enlisted for overseas service with the 219th Battalion of the Nova Scotia Highlanders. In 1917 he joined the Royal Air Force, training as a flying officer and serving as Captain until 1919, when he returned to Acadia to complete his BA in Economics and English.

In 1921 he was accepted into Harvard Business School, but after spending the summer reporting on the Supreme Court for the Amherst Daily News, he decided to switch to law. He graduated from Dalhousie Law School in 1924 and went to Harvard for one year on a Pugsley Scholarship in International Law. In September 1925 Read returned to Dalhousie to begin his career as a law lecturer, and from 1931-1934 he served as George Munro Professor of Law, with a one-year sabbatical spent at Harvard earning his Doctor of Juridical Science degree. In 1934 he accepted a teaching position at the University of Minnesota and was admitted to the Minnesota Bar. He remained at the University of Minnesota until 1950.

During the Second World War, Read served as a Major in the Minnesota wing of the United States Civil Air Patrol. At the request of his colleague and friend, Angus L. Macdonald (then Minister of National Defence for Naval Services), Horace joined the Royal Canadian Navy Volunteer Reserve. With the rank of Commander, Read became Chairman of the Naval Regulations Revision Committee and served as principal architect in the revision of the Naval Regulations, as well drafting the Naval Service Act of Canada in 1944. Read also served as Chairman of the Canadian Naval Orders Committee from 1944-1945. As a result of this service he was awarded the Order of British Empire in 1946.

In 1950 Read returned to Dalhousie to take up the twin posts of Richard Chapman Weldon Professor and Dean of the Faculty of Law, and established the Nova Scotia Centre for Legislative Research. In 1964, after being appointed Sir James Dunn Professor and Dean Emeritus of Law, Read became Vice-President of Dalhousie, stepping down in 1969 to pursue full-time teaching until his retirement in 1972.

The complete custodial history of this fonds is unknown; records were received in five accessions between 1978 and 2006. Some accessions were provided by the Dalhousie University Faculty of Law

Materials do not circulate and must be used in the Archives and Special Collections Reading Room. Contact departmental staff for guidance on reproduction.