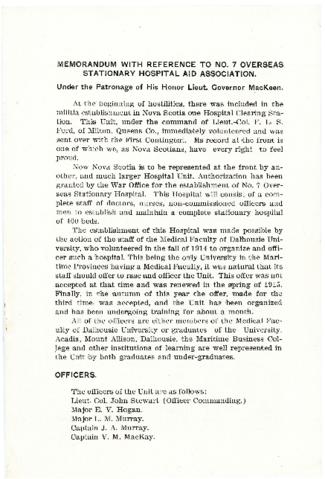 The Dalhousie University No. 7 Overseas Stationary Hospital was established in response to the need for qualified medical personnel to serve in the First World War. After the fifth-year medical students volunteered their collective services in August 1914, President Mackenzie wrote to the War Office with an offer on behalf of Dalhousie to raise, staff and equip a stationary hospital similar to those recruited from other Canadian universities. Twice rejected, in September 1915 Dalhousie’s proposal was finally authorized, and two months later the hospital was mobilized, having recruited a staff of 165—surgeons, physicians, a pharmacist and 27 nurses. Of the twelve medical officers, most were Dalhousie graduates or faculty, while many of the nurses were graduates of the Victoria General Hospital. Fourteen enrolled students and nine alumni joined the unit as privates. The unit was led by Dr. John Stewart, who was later appointed Dean of Dalhousie's Faculty of Medicine.

The newly formed unit was given the university’s former Medical College Building as training quarters, and on 31 December 1915 the No. 7 embarked from St. John, New Brunswick. After setting up at the Shorncliffe Military Hospital in Kent, England, the No. 7 made its way to France in June 1916, where it took charge of a British base hospital at La Havre and established a second hospital on the city's outskirts. A year later it transferred to St. Omer to set up a tent hospital, where on 8 June 1917 it met its first consignment of wounded, which consisted of 392 German soldiers. Until April 1918, the No. 7 served in the “Evacuation Zone,” where primarily patients from the Allied forces were transferred from front-line clearing hospitals to be treated and stabilized before being moved to hospitals in their own countries. The No. 7 was repatriated to Canada in 1919.