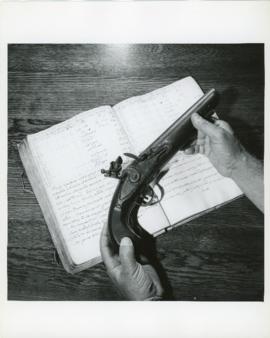 Item, a photograph, has a stamp marking it copyright to the National Film Board on the reverse side. The El Hercules was captured in the Caribbean by a Liverpool privateer around 1799. The flintlock pistol was found behind the wainscot in the house of Dr. Farish. Farish arrived in Liverpool around 1840, the same time when many of the privateermen from the Napoleonic Wars and the War of 1812 were still living. Dr. Farish's house was later occupied by Dr. John Wickwire between the 1930's to the 1970's. A duplicate copy of the photograph can be found in MS-2-202, Box 54, Folder 10.