Item consists of a video by Tom Sherman. Originally conceived of as an installation, “Exclusive Memory” is based on excerpts of a 6 hour monologue by Sherman to a machine, a computer-based video sensing robot, created by the artist.

Item consists of a silent video by Tom Sherman. Originally conceived of as an installation, “Exclusive Memory” is based on excerpts of a 6 hour monologue by Sherman to a machine, a computer-based video sensing robot, created by the artist.

Item consists of a video by Tom Sherman. Originally conceived of as an installation, “Exclusive Memory” is based on excerpts of a 6 hour monologue by Sherman to a machine, a computer-based video sensing robot, created by the artist.

Item consists of a video recording that is based on excerpts of a six hour monologue by Sherman with a computer-based video sensing robot, created by the artist for an exhibition.

Debert bunker : by invitation only

Item consists of video work created by Liz MacDougall in 1985. Debert Bunker: By Invitation Only was described as the following: The occasion of this tape was a military coordinated rehearsal of emergency measure in the event of a nuclear war. This dry-run, which had officials (mostly men) seeking shelter from fall-out that the underground bunker at Debert, NS might provide, became the focus of non-violent collective activism from several maritime-based affinity groups (mostly women). The narrative alternates action footage with commentary from group representatives. The intention was that of describing and documenting the processes and symbolic gestures employed by each group. Women from the action had not previously used video made important contributions to production. The tape uses interviews intercut with live dramatic performance, live ritual, live footage. as well as stills and medical clips. Voice-over and live sound are both used.

Subseries contains records pertaining to the facilities and infrastructure of the Nova Scotia Agricultural College, as well as construction and renovation of buildings on campus between 1912-1986. Record types include reports, designs, blueprints, and correspondence.

Fonds contains graphic materials collected by Lynn Murphy through her association with the Gay and Lesbian Association (GALA) of Nova Scotia, and participation in organizing Halifax Pride marches and parades, in addition to other LGBT initiatives in Halifax. Fond contains one series of posters, banners, and flags produced or collected by GALA for use in Pride marches and parades, as well as other political demonstrations, GALA meetings, and dances, or relating to event held at Rumours bar. Fonds also contains posters for LGBT-related events in Halifax, posters for LGBT films, posters encouraging safe-sex practices and political activism, as well as Pride Guide mockups from 1996 and 1998.

File contains posters for events held at Rumours bar. Materials include one poster for A holiday season gathering, held 1985-12-19; one poster for the Gay and Lesbian Association (GALA) general meeting held on 1992-05-06; and one poster for Jest for laughs, a show featuring the Fabulous Fakes and Friends, held on 1993-09-06.

Posters for A rhapsody in blue, Mad Hatter's tea party, Halloween at Rumours, One size fits all Christmas party and show, and Valentine's weekend events

Posters for Bahama nights, Easter weekend, May day, Rumours goes to the movies, and Everybody says don't events 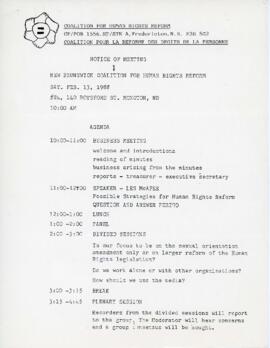 Reports and articles regarding gay rights

File contains a notice of a meeting from Coalition for Human Rights Reform New Brunswick 1988 and several documents titled "Strategy for Gay Rights", "AIDS, Human Rights and the Revival of Lesbian/Gay Politics in the Maritimes" by Anne Bishop, 1989, "Rights Now" Strategy for Gay and Lesbian Rights", a paper on discrimination against Gay and Lesbians, and a paper titled "Sexual Orientation and Human Rights in Nova Scotia". File also contains LGRNS missions statement.

File contains a list of media outlets in Quebec and the Atlantic provinces, and a list of press contacts in Halifax.

File contains a job posting for a community development co-ordinator for the LGBT community in Halifax Regional Municipality.

File contains a pamphlet from Birthright, a Christian organization that provides assistance to expecting mothers and discourages abortions.

File contains a memo regarding a Gay Alliance for Equality billeting proposal for out of town visitors. Ron and Bryan Garnett-Doucette first met through the use of this billetting service.

Pamphlets, newsletters, and correspondence from Sparrow; clergy and congregation directory

File contains correspondence, pamphlets, and newsletters from Sparrow, a support community for gay and lesbian Christians. File also contains one copy of the Universal Fellowship of Metropolitan Community Churches Directory of Congregations and Clergy.

File contains one pamphlet for the Dignity Canada Lesbian and Gay Catholic Association and accompanying correspondence from the Dartmouth chapter of the organization.

File contains two information sheets regarding the operations of the Gay Alliance for Equality (GAE) and its association with the GayLine, one pamphlet regarding the Gay and Lesbian Association's funding issues, and one drop-in nite event pamphlet.

File contains one notice for meetings of the Lesbian, Gay and Bisexual Youth Group in Halifax.

Resource list of feminist services and organizations in Halifax

File contains one copy of a resource list of feminist services and organizations in Halifax, co-sponsored by A Women's Place and the Halifax City Regional Library.

File contains one copy of a directory of LGBT-friendly businesses, spaces, and services in Nova Scotia.

Reference materials regarding LGBT services, community groups, and events, and other helplines

Subseries contains reference materials relating to the operations of other helplines, as well as information about LGBT businesses and services, community groups, and events in Halifax, across Canada, and in the United States, Europe, Mexico, and Oceania. Materials include advertisements and press releases, pamphlets, newsletters, flyers, information sheets, and directories.

File contains two flyers and one newsletter from the Right to Privacy Committee.

Understanding the law : a guide for women

File contains one copy of Understanding the law: A guide for women in Nova Scotia.

Proud but cautious : homophobic abuse and discrimination in Nova Scotia

File contains one copy of the report Proud but cautious : homophobic abuse and discrimination in Nova Scotia [author Carolyn Gibson Smith]. This report was produced as a project of the Nova Scotia Public Interest Research Group.

Narcotics Anonymous meeting notice and pamphlets about recreational drug use

File contains six pamphlets regarding recreation drug use, nd one flyer of a meeting of Narcotics Anonymous in the Gay and Lesbian Alliance community centre.

File contains correspondence regarding GayLine volunteer qualifications and GayLine's request for volunteers.
Results 1 to 50 of 33856