Documentation of artists and programs

File contains administrative documents including correspondence with CKDU, Sackville Heights Junior High, Eskasoni Elementary and Junior High, and the University College of Cape Breton, broadcast schedules for the show, a blank waiver, one newspaper article regarding Rock Meets Bone, program notes with an order form, and one filled out purchase form. File also includes documents from the conference that inspired Rock Meets Bone, including a brief description and schedule. 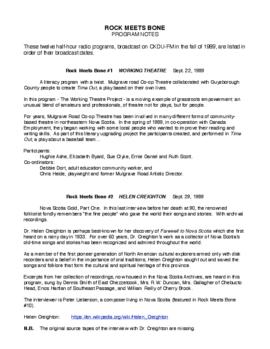 File contains program notes for each episode of Rock Meets Bone, including thumbnail descriptions of each episode, background information on the theme and participants, and pertinent online links.

Sub-series includes the raw audio files that contribute to the final Rock Meets Bone episodes. The materials are in the form of both cassette tapes and digital files on a USB drive, and contain unedited interviews.