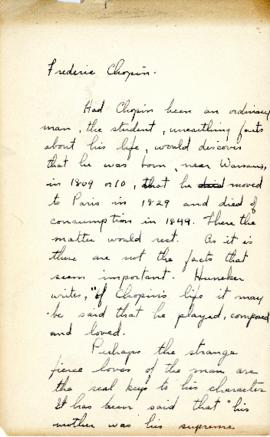 Handwritten manuscript of a radio introduction piece about Frédéric Chopin

Item consists of a five-page, 479-word handwritten manuscript written by David Murray. Item consists of an introductory piece about the career and influences of Frédéric Chopin, written for a radio broadcast introducing the playing of Chopin's Nocturne No. 13 (about "the march of fate crushing a life") and its "direct opposite", Waltz Op. 70, No. 1, "the very essence of gaity [sic] and sprightfulness."

File contains drafts of program notes and research by Anthony Pugh concerning music by Frederic Chopin. The file includes the booklet from a record of Chopin's Waltzes by Arthur Rubenstein, presumably used by Pugh in his research, and a partial program from a concert at the University of New Brunswick as part of the annual Walter Baker concert series.