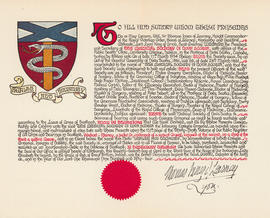 Ensign Armorial for the Medical Society of Nova Scotia

File is the incorporation certificate for the Medical Society of Nova Scotia.
Text: To all and sundry whom these presents
Do or may concern, we, Sir Thomas Innes of Learney, Knight Commander of the Royal Victorian Order, Baron of Learny, Kinnairdy and Yeochrie, Advocate, Lord Lyon King of Arms, send greetings: Whereas the President and Secretary of The Medical Society of Nova Scotia, with offices at the Public Health Clinic, University Avenue, Halifax in the Province of Nova Scotia, Canada, having by petition unto Us of date 17th March 1954 shewn: that the Society was, y an Act of the General Assembly of Nova Scotia, 1861, cap. 69, of date 28th March 1861, incorporated in the name of "The Medical Society of Nova Scotia", and that the said Society was empowered to hold real estate: that the present Officers of the said Society are as follows; President; Myles Gregory Tompkins, Doctor of Medicine, Master of Surgery, Fellow of the American College of Surgeons, residing at Glace Bay; 1st Vice-President; Hugh Fraser McKay, Lieutenant-Colonel (Supplement Reserve, Royal Canadian Army Medical Corps), holder of the Efficiency Decoration, Doctor of medicine, Master of Surgery, residing at New Glasgow; 2nd Vice-President; Dara Mason Cochrane, Doctor of Medicine, Master of Surgery, residing at River Hebert; all in the Province of Nova Scotia; Treasurer Robert Orville Jones, Bachelor of Science, Doctor of Medicine, Master of Surgery, Member of the Royal College of Surgeons, Licentiate of the Royal College of Physicians, Dean of Medicine, Dalhousie University, Halifex aforesaid: that the said Medical Society of Nova Scotia is desirous of bearing and using such Ensigns Armorial as might be found suitable and according to the Laws of Arms of Scotland, know ya therefore that We have devised, and do by these presents assign, ratify and confirm unto the said The Medical Society of Nova Scotia the following Ensigns Armorial, as depicted upon the margin hereof, and matriculated of even date with these present upon the 157th page of the thirty-ninth volume of our Public Register of all Arms and Bearing in Scotland, videliced: - Murrey, a pallet or, environed of a serpent Argent, langued of the second, on a chief of the third a saltire Azure, and in an Escrol below the same this motto "Health and Humanity", by demonstration of which Ensigns Armorial, Insignia of Nobility, the said Society is, amongst all Nobles and in all places of honour, to be taken, numbered, accounted and received as an Incorporation-Noble in the Noblesse of Scotland; IN testimony whereof we have subscribed these presents and the Seal of Our Office is affixed hereto at Edinburgh, this twenty-seventh day of April in the third year of the Reign of Our Sovereign Lady Elizabeth the Second, by the Grace of God, of Great Britain, Ireland, and the British Dominions beyond the Seas, Queen, Defender of the Faith, etc., and in the year of Our Lord one thousand nine hundred and fifty four. 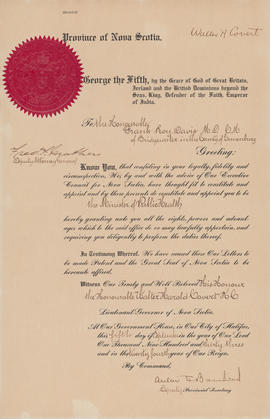 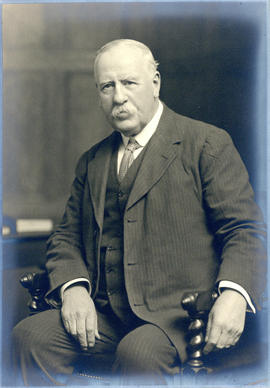 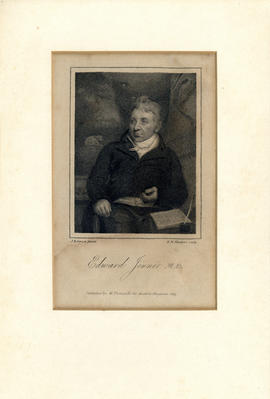 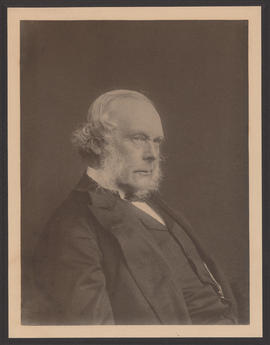 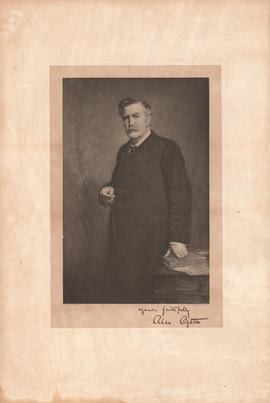 File is a engraved reproduction of a painting by Fiddes Watt. The subject is Alexander Ogston.