A journey to the centre of the universe : [drafts] 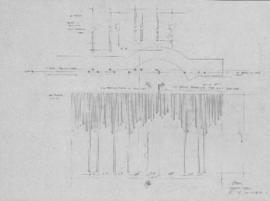 File contains set designs for Neptune Theatre's production of "A Midsummer Night's Dream," directed by Ouzounian and designed by Chesney. The file includes Chesney's original drawings and some annotated copies.

File contains the script for the play by Frederick H. Thury, adapted from the children's book of the same name by Joyce Barkhouse and Margaret Atwood. The file also contains newspaper clippings and correspondence related to the play.

File contains two copies of the fourth draft of "Battle Fatigue" by Jenny Munday. The draft was written in Guysborough and Montreal from August to October 1989, with re-writes in March 1990.

Contracts, posters, and other documents from dinner theatre productions of "Have you ever been to Bombay?"

File contains documents related to a dinner theatre production of "Have You Ever Been to Bombay?" by Jenny Munday, Elizabeth Goodyear, and Ilkay Silk. The documents include photocopies of reviews of the play; a draft of the program; posters; press releases; contracts between the authors and the hotels where the dinner theatre was performed; expense reports; budgets; schedules; and an application for financial assistance from the New Brunswick Department of Tourism, Recreation, and Heritage Cultural Development Branch for the production.

Contracts, programs, and other documents from Live Bait Theatre's production of "Relatively Harmless"

Correspondence and dramaturgy notes from a workshop at the Confederation Centre

File contains documents related to a workshop of a Political Cabaret at the Confederation Centre in Charlottetown, Prince Edward Island. Jenny Munday participated in the workshop. The documents include correspondence between Munday, Colin Jackson, and Michael Shamata, including dramaturgy notes by Munday.

File contains documents related to Jenny Munday's participation in the 1993 Banff Centre for the Arts Playwrights' Colony. The documents include an issue of "The Canadian Voice: A Newsletter Devoted to New Plays and New Play Development"; a contact list; correspondence between Munday and Banff; drafts of "Drowning for Beginners" by Edward Manning and "In Banff There Are Swimmers in the Sky" by Munday; a contract between the Banff and Munday; a travel itinerary; information about the playwrights' colony; and a flyer about Michel Tremblay, recipient of the Banff Centre National Award 1993.

File contains documents related to a workshop of "Battle Fatigue" (previously known as "A Woman's War" and "Mother What Do I Do Now?") by Jenny Munday at Gallery Connexion in Fredericton, New Brunswick. The documents include a poster for the workshop; correspondence between Munday and Edward Leger of Tourism, Recreation, & Heritage New Brunswick; applications for workshop funding; expense reports for the production; notes on the script; related addresses; other correspondence.

File contains a letter from the actress Anna Frery, thanking John Daniel Logan for his critique of her performance in Aida by Giuseppe Verdi. The letter is written on letterhead from the Grand Union Hotel Co., Limited.

File contains a letter from the English actor Harry Irvine in response to John Daniel Logan's criticism of his performance in "Othello" at an unidentified theatre in Halifax, Nova Scotia. The letter mentions a future lecture at Dalhousie College on "William Shakespeare: A Human Being."

File contains a letter from the American actress Percy Haswell thanking John Daniel Logan for his newspaper articles on her. The letter is written on letterhead from the R.M.S. Royal Edward.

Correspondence, meeting minutes, and other documents from the President's Advisory Committee for Theatre at St. Thomas University

File contains documents related to Jenny Munday's participation in the President's Advisory Committee for Theatre at St. Thomas University. The documents include correspondence; meeting minutes; proposals; information about events at STU, Black Box Theatre, and other theatre organizations; and other documents.

File contains documents about the 4th Annual Costume Society Symposium at Bath, other documents related to the Costume Society, a project proposal for the Dalhousie Craft Fashion Project, information about a Dalhousie Theatre Department fashion show, criteria for promotion from the University of Regina Theatre Department, information about an exhibit called "Women of Invention" at the Manitoba Museum of Man and Nature including two slides, photographs and sketches of the Salvation Army building on Cunard Street, a letter about a development on Hollis Street, a price list from Weaver's Loft, a list of contact information for various services, documents about the Louisbourg Calendar Project, 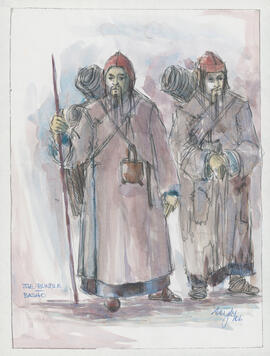 Item is a watercolour sketch of a costume design for Red Deer College's production of Edward Bond's The Bundle. The costumes are for a character (or characters) named Basho. The sketch shows two figures wearing the costumes. 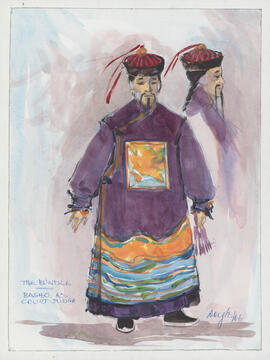 Item is a watercolour sketch of a costume design for Red Deer College's production of Edward Bond's The Bundle. The costume is for a character named Basho as a court judge. The sketch shows a figure wearing the costume as well as a detail of the figure's profile. 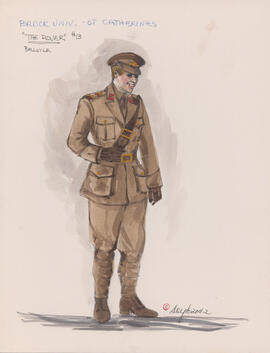 Item is a watercolour sketch of a costume design for Brock University's production of The Rover. The costume is for a character named Belville who is a soldier. 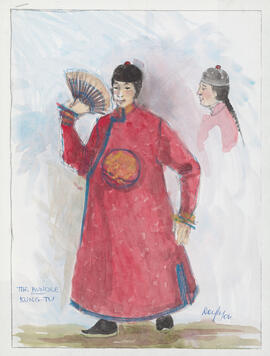 Item is a watercolour sketch of a costume design for Red Deer College's production of Edward Bond's The Bundle. The costume is for a character named Kung-Tu. The sketch shows a male figure wearing the costume as well as a detail of the character's profile. 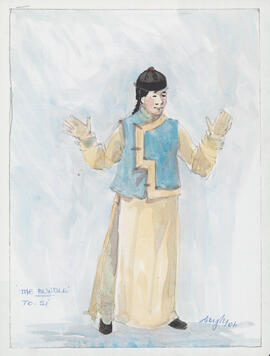 Item is a watercolour sketch of a costume design for Red Deer College's production of Edward Bond's The Bundle. The costume is for a character named To-Si and the sketch shows a figure wearing he costume. 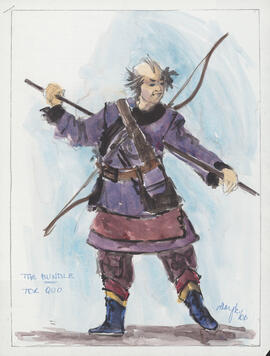 Item is a watercolour sketch of a costume design for Red Deer College's production of Edward Bond's The Bundle. The costume is for a character named Tor Quo and the sketch shows a figure wearing the costume. 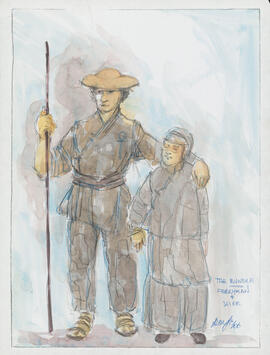 Costume design for the Ferryman and Wife

Item is a watercolour sketch of a costume design for Red Deer College's production of Edward Bond's The Bundle. The costumes are for the ferryman and his wife. The sketch shows two figures wearing the costumes.

This collection primarily consists of theatre and film scripts read during the "ScripTease" dramatic reading series or "Playwright's Corner." The fonds also contains some correspondence and administrative records and two catalogues of plays.

Gilbert and Sullivan Society : The Pirates of Penzance 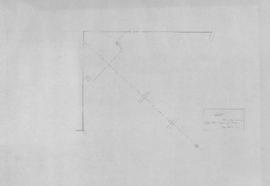 File contains original and annotated copies of stage diagrams for the Holiday Inn in Halifax, Nova Scotia and the Inn at Willow Tree. The Holiday Inn drawings were drawn by Trevor Parsons.

File contains Jenny Munday's application to the Banff Playwrights Colony, including drafts of the play; Munday's resume; correspondence; reference letters; computer printouts of information about the colony; and other documents.

Letters from students and teachers at St. George's School

File includes a picture of students and teachers at St. George's School in Paradise River, Newfoundland and the script for a play "To be or not to be," performed at the school.

The fonds includes Linda Moore's papers and files relating to her work as director of Neptune Theatre in Halifax. The fonds includes designs and annotated construction plans and photos of the theatre; annotated scripts, photos, and production notes from Neptune shows; correspondence and interview texts; video and audio footage of productions and auditions. There is also a substantial volume of material relating to the world premier production of Dracula: a Chamber Musical.