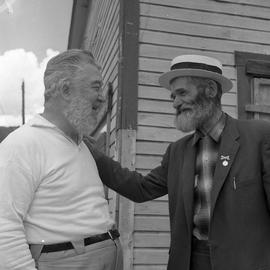 Photograph of Ralph Dunn and Black Mike standing together in Dawson City, Yukon

File contains a negative and a print of a photograph of and actor named Ralph Dunn standing with Black Mike, a man from Sarajevo, Serbia who claimed to be the oldest man in Dawson City. The two men are facing each other and Black Mike's hand is on Dunn's shoulder. Dunn was in Dawson City to act in a production called "Foxy."

Recording of an interview with Robin Craven